"Crank II: High Voltage" is the best sequel ever. 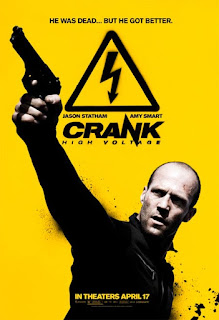 Most sequels seek to take what was successful about the original and turn it up a notch. This often results in a copy-of-a-copy feeling that proves the rule of diminishing returns. The most successful of these feel as if they were saving all their best the second installment.
When I rented “Crank” and “Crank II” in succession I thought the first would prepare me for the second.
This was very, very wrong.
“Crank” is based on the premise that that professional hitman Chev Chelios can’t stop moving or else the synthetic Chinese poison that has been injected into his blood stream will kill him.
“Crank II” takes this about 100 steps further by having his heart replaced by a mechanical organ that needs to be juiced to continue working.
Watching “Crank II” you almost get the sense that the first installment was just an excuse for the second’s existence. The introduction of high levels of electricity was a stroke of genius. The first film was an open-ended canvas for which every way of raising Chelios’ heart rate were splashed on screen. This goes many times more for the second film. In “Crank II” Chelios tasers himself, grabs a power pole and attaches jumper cables to his nipples.
My words would only do a disservice to this whirlwind and after only one viewing I’m not sure I caught everything. I vaguely remember a flashback in which Chelios’ mother, played by Geri Halliwell (formerly Ginger/Sexy Spice,) takes him on a talk show because of his bad behavior. There are a hundred other fantastical, disconnected images in my memory that I can’t quite piece together.
No matter the viewer’s sensibilities, boredom is not an emotion I would imagine many dealt with.
Posted by Rob at 1:39 PM