Every bad movie should watch "Crank" and take notes. 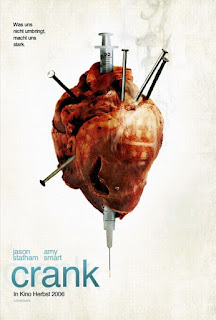 "Crank" is the definition of a must-see movie.
I'm not sure I mean for everyone. There are certain sensibilities that won't take to it's XTREME nature. I wouldn't want to waste anyone's time.
What I want is to make this required viewing for every director who realizes they are in the midst of making a film that doesn't work. I fully understand that no one sets out to make a shitty movie. Things happen. I get it.
What I can't stand more than anything is a piece of art that's strictly middle-of-the-road. The worst thing a movie can be is forgettable. I know I've seen "S.W.A.T." and "The Leauge of Extraordinary Gentlemen." I have the ticket stubs to prove it. The problem is, I can't remember anything about them. Not one single, solitary scene. That's probably five hours and several dollars out of my life. I'll never see that again. 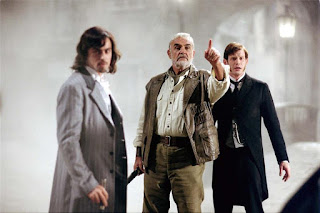 "You there! Director boy! Make with that paycheck I was promised!"
"Tromeo and Juliet" was a horridly bad movie, but the image of Tromeo eating popped popcorn out of Juliet's cleanly exploded stomach will live with me until the day I die.
"Crank" is a bad movie. Now when the directors looked at the fork in the road they went straight. They took their concept to the max. The movie has a built-in driver that the rest of the plot is speared on and super-charged by: Hired killer Chev Chelios (Jason Statham) is injected with a synthetic Chinese poison that will kill him if he stands still.
But still...
Subtitles that only cover random phrases embedded in sentences. Overt, surely paid, corporate shoutouts to Google maps. The inclusion of every racial stereotype for every hue except white, who are always the heroes. These do not normally a great movie make.
But still...
The chutzpah to have your main character standing atop a stolen motorcycle rolling down the street in a hospital gown; all while sporting an implied erection, now that's entertainment.
This above all, to thine own self be true. If you're going off the rails anyway, why NOT step on the gas?

UPDATE: Just looked on the special features and apparently you can listen to the family-friendly audio version of the movie that plays on cable television and on airplanes. Genius.
Posted by Rob at 1:12 AM