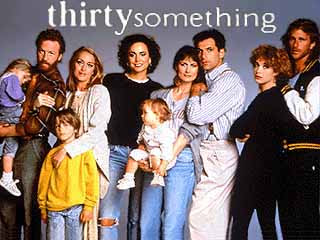 On September 29, 1987 I was 4.5 years old and my brother Chris had been on the planet for four months. That was the day the television show thirtysomething premiered the pilot episode of its run. October 27, 2009 was the day I watched it for the first time.
It is about as terrible as I expected.
All these yuppies can cry me a river of synthesizer tears. I get the premise. The baby boomers are upset that the revelation has been bought and sold. But in the present tense, with unemployment poised to crack 10 percent, they can sing the young urban professional blues to someone else.
The 80s were a weird time for fashion, especially for those older than 20 the time. At least the kids had an interesting take on it. The sons and daughters of the Greatest Generation, though, were thoroughly confused. Overalls, jean shawls and puffy, flowery blouses for the women and tucked in, knitted, square-bottomed ties for the menfolk.
Mostly I don't like this show becuase in many ways it's like a made-for-TV version of the baby boomer experience of the Greed Decade. Ba humbug.
Posted by Rob at 1:03 AM