Wal-Mart: From the womb to the tomb 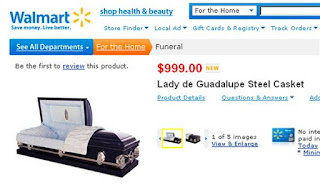 Maybe you've heard this and maybe you haven't but Wal-Mart, following in the footsteps of Costco, is now offering caskets for purchase on their Web site.
My first instinct was to scoff at this and shake my head at the downfall of society. The more I think about it, though, the more sense it makes. If you're willing to procure your final resting place from here, you're probably already a dedicated Wally World shopper anyway. What could be more fitting than buying your casket from them as well?
From the Associated Press article:

The caskets come from Star Legacy Funeral Network, Inc., a company based in McHenry, Ill., that sells the same caskets for about the same price — some less — on its site, along with many others.

Star Legacy CEO Rick Obadiah said the response in the first week has been better than the company or Wal-Mart expected, though he declined to give specifics. A spokesman for Walmart.com also declined to release sales figures and downplayed the venture.

"Several online retailers offer this category on their sites," spokesman Ravi Jariwala wrote in an e-mail. "We are simply conducting a limited beta test to understand customer response."

But Obadiah said it is not simply a test. He said more than 200 Star Legacy products, including pet urns and memorial jewelry, and eventually about two dozen caskets, will be sold at walmart.com. The company also supplies similar types of products to online retailer Overstock.com and urns to CostCo's Web site.

This reminded me of a bit comedian David Cross does on his "It's Not Funny" CD about segregated graveyards in the deep south:

There's a kind of racism in the south that is really so steadfast and true that I almost kind of begrudgingly, you know, admire it in a way, and that is that there are segregated graveyards. That just to me defies all logic...but it's also, like, "Well, hats off...you're going to stick to your guns on that one, and take that shit to the grave? All right!" There's enough people to go, "Naw, man..ugh, I don't even wanna think about it. My dead, lifeless, rotting, maggot-infested corpse...next to some black man's? Ewww!!! That's gross!" But that does pose an interesting scenario, because, what's going to happen when the zombies rise out of their graves? ... "We must take over the human race-- wait, what were you?" "I'm black." "Fuck you, nigger, you can't come." "What? No! But I'm a skeleton, you can't tell!" "Fuck youuu..."

That's what I love about these two death-related ideas: even if I think they're insane and stupid you have to give to the people that participate in them for their commitment to the idea.
It really does give a new twist to Wal-Mart's motto: 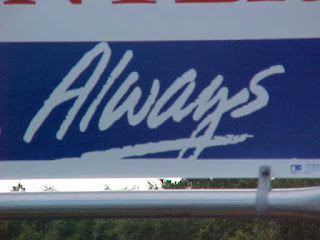