Stephen Colbert: Winner of the Stephen T. Colbert Award for The Literary Excellence! 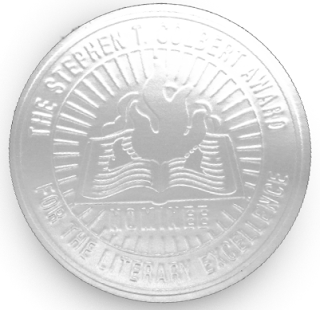 I am currently in the process of writing my first book proposal. This is especially difficult, not just because I haven't done it before, but also because there is no set format for it. Everyone seems to have a different idea of what a good example is supposed to be.
There is at least one area in which most of these guides seem to converge. They all want you to give some sort of author credentials that will allow to appear as some sort of authority on the subject at hand. This can range anywhere from a familiarity with the subject to a foreword to be written by someone famous. This can also include a list of awards your previous works have won.
This alone can push your book to the top of the pile (From Salon):

Literary awards are more than just ego boosts these days. As the critic James Wood observed a few years back, "prizes are the new reviews," the means by which many people now decide which books to buy, when they bother to buy books at all. There are some 400,000 titles published per year in the U.S. alone -- one new book every minute and a half -- according to Bowker, a company providing information services to the industry, and there are fewer people with the time and inclination to read them. If you only read, for example, about five novels per year (a near-heroic feat of literacy for the average American), you could limit yourself to just the winners of the NBA, the Pulitzer, the National Book Critics Circle, the Booker Prize and then, oh, a Hugo or Edgar winner -- or even a backlist title by that year's Nobel Prize winner. You'd never have to lower your sights to anything unlaureled by a major award.

It seems hard enough to break through the fog without having to show off my literary bonafides. I know I can write the book I want to, but I'm considering pulling a Stephen Colbert. When his book "I Am America (And So Can You)" came out in 2007 it featured a sticker on the front reading "The Stephen T. Colbert Award for Literary Excellence." (From Wikipedia):

A sheet of twelve similar stickers are provided inside, with which readers are provided to nominate other books for the award. A second sheet of stickers containing positive expressions such as "Hell Yeah!", "Nailed It!" and "It's Morning In Colbert-ica" is included for readers as bookmarks to remind themselves "when you agreed with me most."

According to the Salon article quoted above though, this could be a reality:

An e-mail press release for a book crossed my desk not long ago, prominently garnished with a large medallion proclaiming it a winner of "The National Best Books 2009 Awards." For a moment, I misread that as "National Book Award," and did a double take, which is surely what whoever came up with that name intended. Curiosity about the National Best Books 2009 Awards led me to the Web site for USA Book News, produced by an outfit called JPX Media, which claims offices in Los Angeles and New York.

Why bother to set up a Web site regurgitating cover art and promo copy that anybody can find on Amazon.com? The answer, of course, lies in the National Best Books 2009 Awards, a contest that features no fewer than "150 active categories," including three subcategories of "Animals/Pets" and 13 subcategories of business books. There's a prize for the best children's book on the theme of "Mind/Body/Spirit" and for the best history of media and entertainment. By all indications (JPX Media did not respond to phone calls requesting information), everyone who enters in any category winds up listed as a "finalist," and some categories are so specific ("Mythology & Folklore") that they have only one entry.

Best of all, as USABN's Web site freely promises, "the National Best Books Awards are the ONLY Awards Program in the nation that offers direct coverage to the book buying public for every entry." Like the Special Olympics, this is a competition that everybody wins. If you enter the 2010 contest by the end of this year, they'll even throw in a "six-month full-color listing on USABookNews.com," which is "valued at $1500.00!" despite the fact that none of the publishers whose books are listed there now seem to have paid for this service or even to be aware that it's been provided.

Every winner and finalist -- i.e., everyone who enters -- can purchase gold medal-style stickers announcing the fact, which can then be slapped on the cover of the book, making it look deceptively similar to books that have won legitimate prizes like the Newbery Medal. The fee for all this is $69 (about what you'd pay to nominate your book for the National Book Awards or the Pulitzer), though you do have to pay it for each category you wish to enter; if, say, you want to send in your children's book about Mind/Body/Spirit issues in the history of the media, you'd have to pay $138 to enter it in both categories.

As we used to say at the camp I worked at when we were forced to play games that didn't have a clearly defined goal:
Everyone's a winner, except all the losers.
Posted by Rob at 6:19 PM