Target of the target audience

Since asking my lovely fiancée Ash Leaf to marry me last Halloween I have learned and thought more about weddings than I ever had in my entire life. Whereas women seem to have already spent many an idle hour contemplating their nuptuals prior to being queried by a gentleman caller, most of this is hitting me for the first time.
One of the most interesting new developments has been reading the wedding magazines that Ash has both subscribed to and bought over the last year. 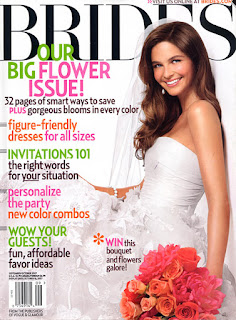 So when I opened to page 45 of the November-December issue of "Brides" yesterday this is what I saw: 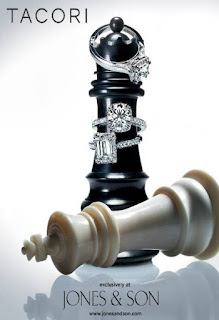 When I was a student teacher in England one of my favorite lessons I taught was the day we analyzed a series of print advertisements for the hidden meanings. I'm guessing it wouldn't take even an English 12-year-old to figure out what this one is trying to say.
Since this is an advertisement I've seen before in other bridal-related publications I'm obviously not the one this is marketed towards. Quite to the contrary. In fact, I am a character in this advertisement.
First, look at the setting. We have two chess pieces, one white, one black. The pieces are also of two different types: one is a queen, who is standing, and the other is a king, who is tipped over on the ground. This is significant because even in the absence of a chess board, this is generally recognized as the stance the king takes when "checkmate" is called, meaning there is no other moves the king can make without being taken down.
Next, observe what the queen is wearing: Diamond rings. And not just one diamond ring, not even two, but THREE. Three diamond rings.
Finally, let's take a step back and observe what this advertisement is saying to the subscribers of "Brides"? It's obvious by now isn't it?: If you, the queen, knock down the king, put him in checkmate if you will, you will get three diamond rings.
In any event it's some of the most forceful advertising I've seen in quite some time.
Posted by Rob at 9:11 PM