I found the record player that adorns my living room outside of a recycling center in Bloomington, Ind. I picked it up in the hopes that it would work and after attaching some free speakers I had gotten while helping a friend's step-father move I basked in the warmth of the music.
Being Sunday morning I had more time than I usually do to utilize my wonderful machine. I also have an extensive and eclectic record collection culled from many a thrift store, so the quality varies wildly. I decided to play it safe and listen to a classic: Simon and Garfunkel's Greatest Hits. Here's a blow-by-blow review of the entire proceedings: 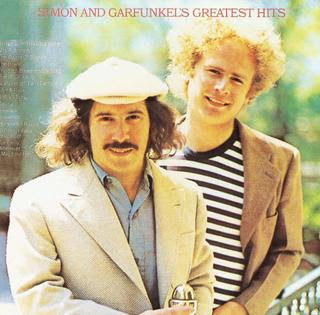 (Editor's Note: Ignore the Beatles pictures. I have no idea why they're there.)

How about that intro? What a way to begin. A classic to be sure. Listening to this song now it seems more condescending in message than I remember. It’s almost as if Paul Simon doesn’t really believe what he’s saying in the choruses to Mrs. Robinson, it’s just to make her feel better.
As far as I remember the lyrics aren’t otherwise connected to the film’s plot other than the name.
According to the Wikipedia article on the song:

Frank Sinatra covered a version of this song for his 1969 album My Way. This version changes a number of lines, including replacing "Jesus" with "Jilly" (Sinatra's close friend) and including a new verse directly referring to Mrs. Robinson's activities in The Graduate:
The PTA, Mrs. Robinson,
Won't okay the way you do your thing
Ding ding ding.
And you'll get yours, Mrs. Robinson,
Foolin' with that young stuff like you do
Boo hoo hoo, woo woo woo.

For Emily, Wherever I May Find Her

Before now I guess I also never realized how large a thread of the Coldplay musical cloth this music takes. I guess this pretty much changed the game for folk and rock music.

Another classic. My dad loves the shit out of this song. I can’t argue with it.
Just again proving that lyrics don’t matter, it’s all in how you say them: he gets a come from the whores on seventh avenue and the next minute he’s admitting to how he was so lonesome he took some comfort there. If this was in a rap song it’d be thumbs down from my dad, but because it’s in this context it’s alright. Just sayin’…

I mean this is a camp song for the ages so what bad could I possibly say about this. Feelin’ groovy…

I’m starting to get the idea these two had some good musical ideas. All kidding aside, I do love this song as well. I used to play this on the organ that lived in the upstairs bonus room of my parent’s house. We had the sheet music for it. It’s so elemental in it’s construction that it almost seems like it should be at least 100 years old.
Extra credit: Did this song start emo? A question to marinate on.

I Am a Rock

If you’ve ever been a dark little poet in the cold winter months this is your theme song, motherfucker. You have your books and poetry to protect you. You are shielded in your armor. Incidentally Me First and the Gimmie Gimmies do a slam bang job with this one.

I always thought this was a folksong since it was one of the public domain songs always included with those “Learn to Play Guitar Books” you buy that they always include because they don’t have to pay anyone for. I looked on the back of the record and it basically only credited Sim. & Gar.
From the Wikipedia article on the term:

The arrangement made famous by Simon & Garfunkel's "Scarborough Fair/Canticle" originated in the mid-20th century. Paul Simon learned it in 1965 in London from Martin Carthy. Then Art Garfunkel set it in counterpoint with "Canticle", a reworking of Simon's 1963 song "The Side of a Hill" with new, anti-war lyrics. It was the lead track of the 1966 album Parsley, Sage, Rosemary and Thyme, and was released as a single after being featured on the soundtrack to The Graduate in 1968. The copyright credited only Simon and Garfunkel as the authors, causing ill-feeling on the part of Carthy, who felt the "traditional" source should have been credited. This rift remained until Simon invited Carthy to duet the song with him at a London concert in 2000.
Prior to Simon's learning the song, Bob Dylan had borrowed the melody and several lines from Carthy's arrangement in creating his song, "Girl from the North Country," which appeared on The Freewheelin' Bob Dylan (1963), Nashville Skyline (1969) (together with Johnny Cash), Real Live (1984) and The 30th Anniversary Concert Celebration (1993).

A good version, but obviously they weren’t the originators of the funk in this instance.

I hate when the audience claps as soon as they recogonize the song because it’s almost like when Kramer would enter the “Seinfeld” set in the later seasons. Acceptance through repetition and familiarity: distasteful.
The song is good. My dad loves this song too. Again I can’t blame him.

I think the Elvis version of this song was so pappy that I can hardly listen to the original without hearing his southern warble instead.

Probably the first song I’ve heard on this record I don’t actually care for. Nothing wrong with it, but it’s kind of plain and disaffecting. All apologies if it were yr. fav.

Yawn. I’m starting to get the idea that maybe Paul Simon is too good at making melodies. His lyrics sometime struggle for attention. His playing is always so strong that it’s hard to even pay any mind to what’s being said even if it’s important.

El Condor Pasa (If I Could)

Another re-purposed folk song. I know everyone did this back then, but it’s a little grating after hearing how fantastic some of their other material is.

Good song, but it feels a little forced as the final song here. It’s like they just bummed us out with the entire middle of this side and now they’re trying to make up for it.
But this is funkier than I’ve heard them get since about 20 minutes ago on “Homeward Bound.”
Posted by Rob at 3:47 PM