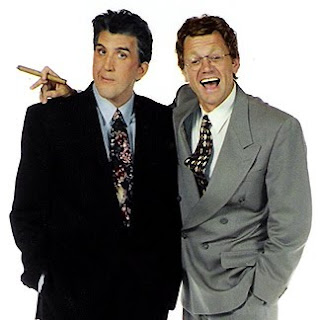 A favorite movie from another time in my life, "The Late Shift" has been mentioned quite frequently lately because of the current war of words between Jay Leno and Conan O'Brien over the future of "The Tonight Show." When I went on Netflix to order this film I was told it would be a "Very Long Wait". This meant that I was probably not the first to make this connection. Nevertheless, I received it yesterday and just finished it tonight.

“There’s No Business Like Show Business” is not only the theme song of this movie, but is played several times. (It is even shown as the last words on screen before the credits.) I would criticize this movie for having terrible music, but it’s about as high-quality as the music on late night television.
Watching this movie it’s odd to think now how serious a force “The Arsenio Hall Show” was in 1991.
Incidentally, these subtitles suck and are lazy. I don’t excuse it for being a Made-For-TV movie either. Copying down all the words doesn’t cost more or anything. You just have to care enough, and apparently they don’t.
At least two actors here also star in the mockumentary “Best in Show”: Bob Balaban (as Warren Littlefield) and John Michael Higgins (in an under-rated protrayl of David Letterman.)
I remember this movie incredibly well from my childhood. In fact, this movie had such an impact on me that I actually started watching more Letterman and Leno after seeing this film.
Whatever you think of “The Late Shift”, there is no doubt it is begging a sequel. If there is not a “Late Shift 2: The Leno Strikes Back” in production right now I have no idea what HBO is thinking. Everybody with even a passing interest in the subject wants this to happen.
If this did occur the cast of characters will have grown exponentially, just as the number of late night talk shows has.
Apparently Quentin Tarrantino has already suggested such a thing, along with everyone else who has watched this movie.
From the L.A. Times:

In many ways, it’s been a pretty good week for Conan O’Brien. On Monday night, Martin Scorsese offered to put him in his new HBO series, and last night Quentin Tarantino said he'd help O’Brien follow the director’s template and make a revenge movie. “They pushed him too far," Tarantino growled, imagining the trailer. "They made promises they had no intention of keeping. They took his show, they killed his dog....They had their way and now Conan will have his.”

It took four years from the time Leno first took over until the time that this movie came out. Hopefully it won’t take that long this time around.
In both cases, Leno is still the villain and everything works out for Letterman/Conan in the end. Letterman moves on to CBS and is currently number one, and public support is so strong in favor of Conan he’s likely to come out on top.

BONUS:
Here are the aforementioned Doritos commecials Leno did during the late '80s and early '90s. He apparently doesn't care whether or not he's selling Cool Ranch or Nacho Cheese. I think I'd feel a little less hostile if he at least was consistent with his selling out: