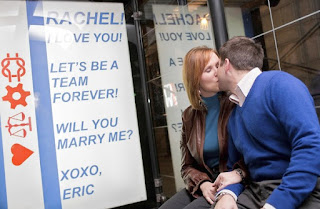 This is a bit late as it actually happened last October, but I just found the story on it. My friend Rachel Clark lives in Chicago and her boyfriend proposed to her in a pretty unique way. I was informed of the plan by her sister Christine prior to the event, and from all accounts it turned out pretty awesome.
From the Chicago Tribune:

Eric Anderson wanted to do something big when he proposed to his girlfriend, Rachel Clark.

So when he spotted the bus shelter at Sheridan Road and Surf Street with available ad space, he had found the site to declare his love to Clark -- and to commuters on Routes 134, 143, 151 and 156. Most importantly, it's the stop Clark uses most days."At first I was afraid it wouldn't be very romantic -- it's a bus station," he said. "But I mentioned it to her sister and my cousin, and they were both excited about it. I had two women who liked it, so I went with it."

Anderson, 25, contacted JCDecaux, which manages the city's bus shelters. The firm typically charges up to $3,000 a month for bus stop ads -- a price out of Anderson's reach. But his request pulled on the heart strings of JCDecaux account executive Sandy Pickett.

"I approached my sales director," Pickett said. "Being a romantic, she said, 'Let's go for it!'"

So the company let Anderson rent the space for one week at a discounted rate, and Wednesday morning, the proposal went up: "Rachel! I love you! Let's be a team forever! Will you marry me? XOXO, Eric." It included symbols of a heart (for love), the scales of justice (she's an attorney), a gear (he's an engineer for Ford Motors) and a knot (as in, let's tie the ...) running down the side.

"I was lost in my own little world," Clark said of arriving at the stop Wednesday. "I marched up to the bus stop, and he was standing behind it. ... He's like, 'Read the sign!' I started giggling and laughing going, 'Yes, yes!'"

As morning commuters ignored the Lakeview couple, Anderson got down on one knee and presented Clark, 28, with a stone passed down in his family for 130 years.

Now, until the sign comes down, Clark gets to relive her proposal each day on her way to work.

"It's kind of cool to have this sort of little secret in the morning," she said. "I want to be like, 'That's me! I'm getting married!'"