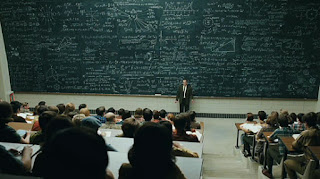 If there is such a thing as reincarnation then I pray that I don't come back as a main character in a Coen Brothers movie.
I know the idea in script-writing is to place your protagonist in a progression of pickles, but the Coens are staggeringly sadistic to their creations. As the lords of their own universe they are vengeful gods, reining down pain and destruction on whoever they deem unlucky enough to be a featured player in their fables.
[Just ask Steve Buscemi, who has been murdered in three Coen films ("The Big Lebowski", "Fargo" and "Miller's Crossing").]
All this brings us to "A Serious Man".
As two of my friends pointed out prior to my viewing of this, even though it is labeled a "black comedy" it is even a stretch to call it a "light tragedy."
After making my way through the twists and turns all the way though the end, I found it had a remarkably similar message to their masterwork "No Country For Old Men." And the message is this: "Life is a series of random, meaningless cruelties and then you die. Oh, and there's nothing you can do about it." Whether or not you also believe this is of no concern to the Coens. Their total commitment to the world of whatever story they're working on is a key ingredient to their successes. They will feed you the morality of this universe no matter what you happen to think of it.
That spirit has been responsible for the Coens' repeat offender status on my all-time movie list. I mean you've got "No Country" and "The Man Who Wasn't There" on one end and then "Raising Arizona" and "The Big Lebowski" on the other extreme of the fear/love continuum.
It can also result in things like "A Serious Man".
The opening scene is a flashback of a family speaking Yiddish in a tiny European shack a long, long time ago. The husband has invited into the house a man that his wife thought had died already. Is this the ancestors of the main character? Does this invitation bring a curse to their ancestors? Who knows.
What follows is period piece set in 1967 Minneapolis and centered around a Jewish physics professor whose life is falling apart. After viewing this movie it should not surprise you that the plot is loosely based on the Book of Job, the man God punished mercilessly and without reason.
"A Serious Man" was a well-made movie. It's Coen Brothers, after all. I also can't stop thinking about it. The problem is that I don't want to. I simply can't control it. This movie has burrowed its way into my brain. It's a puzzle that's begging me to solve it. The Coens give the audience just enough clues to hint at a concept they never explicitly show. The infuriating final scene is the closest they ever get to an answer.
How's this?:
I want you to see "A Serious Man" because it's important, but I can't recommend it because it's so harsh.
Posted by Rob at 4:06 PM