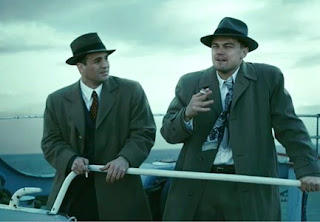 Generally one of my least favorite parts about going to the movies is other people. Namely, I hate people who can't just watch the movie. It's a pretty simple rule. If it's violated, I generally spend the entire time silently fuming at them. In more extreme situations I've even been known to ask for silence.
"Shutter Island" is so good, even this species of annoyance is rendered useless.
To wit: As the screen faded to black at the conclusion of the final scene, the vociferous viewers in our row exclaimed, "Oh, so they're setting it up for a sequel."
Without giving anything away, I can assure you that this was not left open as an option. In fact, I would go so far as to say that anyone with any inclination for abstract thought who had been paying attention would come to the same conclusion I did: There was a period on the end of this sentence.
The beauty of this movie, though, is that even though they completely misunderstood what Director Martin Scorsese was doing here, I'll still bet they had a good time.
And that's what it's all about, isn't it?
"Shutter Island" has atmosphere for days. It is appropriately claustrophobic at all times. Just like the island it's set on, the world of the story has certain limitations that cannot be breached by the protagonist.
The Leonardo DiCaprio factor cannot be overlooked here either. He easily carries this movie across the finish line. Sir Ben Kingsley and Mark Ruffalo are reliably solid here, but DiCaprio is deservedly given the juiciest part.
Providing a plot summary is meant to provide a bedrock of understanding about the premise. "Shutter Island" is a twisty, fractured mystery story that defies easy definition. There really is no solid ground to stand on. Nothing is to be trusted.
I'll be interested to catch "Shutter Island" again when it comes to digital versatile disc. I walked into the theater mostly blind. I had no expectations. Now that I've been down the path Scorsese laid out I'm fascinated to see how I'll react now that I know what's around the bend.
As much as I enjoyed myself watching this movie, I will say that this is not Scorsese's best work. The nice part is that it doesn't have to be. It doesn't feel like anything else I've ever seen by him. Constant disorientation is not what I would consider a hallmark of his craft until I saw this.
Agreeing to purchase a ticket for "Shutter Island" is tantamount to knowingly stepping on a trap door. The bottom is going to drop out immediately and you'll be fine as long as you don't struggle as you slide down the chute below. That's the only way you'll hurt yourself.
Posted by Rob at 3:32 AM