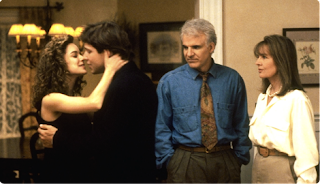 I somehow completely missed both of these movies when they were first out in in 1991 and 1995. (And the original starring Spencer Tracy for that matter.)
What I've learned after finally viewing both in back-to-back succession is that there isn't a situation imaginable that Steve Martin couldn't freak out about. Really it's a lot like "Law and Order" in that they'll both never run out of story lines. The sequel proves that if nothing else. It's not these are two separate movies, but more of a Mad Lib brought to life. The same exact scenes are recycled here in exactly the same order so often that it's hard to remember which you're watching if experienced too close together. As long as Steve Martin is alive he could be doing one of these movies. It has been 15 years since the second installment. (How will Steve Martin deal with Great-Grandfatherhood?) It's not that he has to. It's really just an option if he wants it.
The real reason I've never seen either of these is that it really was never marketed to me. I've never considered being a bride or a father of a bride, especially when I was eight and 12 years old, respectively. Now that I'm 26 and about to be married I have the advantage of insight to gain some relevance from the plot. It doesn't really paint a flattering portrait of parents of young adults. Steve Martin succeeds here mostly because he plays to his strengths, which incidentally are his weaknesses. He constantly acts on his weakest impulses, reacting first through the lens of his own feelings and only later, once the damage is done, does he consider the emotions of those around him.
I am impressed that they got literally every major character back for each of these. It is a testament to how much people love this movie that this came into being. They wouldn't have produced two of these in four years if the people weren't demanding it. The people voted with their dollars and this series is a definitive two-term president.
Posted by Rob at 3:08 AM