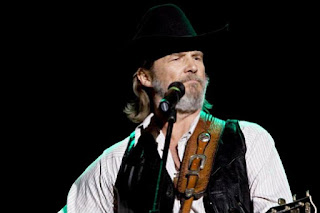 [Editor's note: Ash has rights to first mentioning the association between these the following four films. Consider this the extended dance remix.]

To understand "Crazy Heart" there are three other films that are prerequisites:
We have to talk about "The Big Lebowski".
We have to talk about "The Wrestler".
And we have to talk about "Walk the Line".
This Neapolitan ice cream of a movie couldn't exist without these ingedients. Yet despite being obviously derivative, the connective tissue are the stellar performances of Maggie Gyllenhaal and especially Jeff Bridges.
Bridges won an Oscar for his turn as washed-up country star Bad Blake, but like almost every Academy Awards cycle they're busy playing catch-up. There's any number of roles he should have won for prior to this one. The upside of that is the fact that is an incredibly solid film.
The flick starts with Bad arriving at his latest gig, at a bowling alley. Right away we have visual references to "Lebowski" with this theme. Bad grumbles about this fact after emptying onto the ground a carton of the urine he presumably contributed on the drive. Here we have a several facts that also recall His Dudeness: a 70's automobile with some slight rust discoloration (not unlike The Dude's 1973 Ford Gran Torino), urine (as was used to soil El Duderino's rug) and we never see Bridges bowling even after he's offered all the free games he wants (we never see the deadbeat Lebowski bowl either despite his team membership).
The "Walk the Line" connection comes straight from one T-Bone Burnett who had his pawprints all over both films. In the Johnny Cash biopic he forced Joaquin Phoenix and Reese Witherspoon learn to play their guitars and autoharps for real. In addition, they sang all the classics again instead of being obviously overdubbed. It could have come out horribly, but thanks to Burnett's ear this is not the case. In "Crazy Heart" he has the unique challenge of creating from scratch songs that sound as if they've been part of the country-rock cannon for decades.


"The Wrestler" thread is probably the strongest of any of these. Without "Walk the Line" or "Lebowski" "Crazy Heart" could still exist, it just would have been radically different (almost certainly for the worse). But without "The Wrestler" this would absolutely not exist. There are almost too many parallels to name so I won't lest I spoil either movie for the uninitiated. Just keep it in your head that this is the second story of the house Mickey Rourke built.
The only part I could have done without here was Colin Farrell as the ponytailed, fake-serious neo-country protege of Bad. He does a fine job with both his acting and singing duties, but his role is unnecessary. Either he should have been a more consequential part of the final outcome or he should have been drastically downsized.
The fact is: "Crazy Heart" is comfortable and unsurprising.
The answer is: So?
Posted by Rob at 7:49 PM