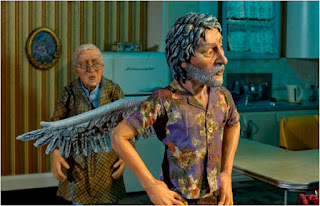 The standard rate for film is 24 frames per second. At this rate is would take 1,440 individual changes to create one minute of finished stop-motion animation. The Australian/Israeli clay-mation film "9.99" is 78 minutes long. That means that it took approximately 112,320 individual shots to complete.
Just based on that fact I expect an exceptional script and a visual justification of the style.
If I had my way every movie would come with a special feature (just like subtitles or filmographies) that would present the film in claymation, puppetry, rotoscope, et. al.
This is not the world we live in. Consequently, only a handful of such pieces have ever been made. This is why I have such high standards for non-cartoon stylized film. "$9.99" is a very interesting movie, but there is no way I would have seen it if it were live action. There are really only a few sporadic scenes that employ bits of magical realism to get a point across. Even so, the majority of even that handful didn't seem remotely challenging for an imaginative editor. It's a quiet, sprawling meditation on money, happiness and death. It's based on the short stories of Israeli author Etgar Keret in which the various characters are only tangentially related at best.
I know that there was thought put into each moment of this presentation, but it would have never been on my radar if it weren't in this format.
The point is: we need to invent the machine that will make my dream of automatic format change a reality. It won't just be for live-action films in search of a shot in the arm, but also so that wrongly selected specimins such as this one can return from the Island of Misfit Toys and find a home.
Posted by Rob at 2:41 AM