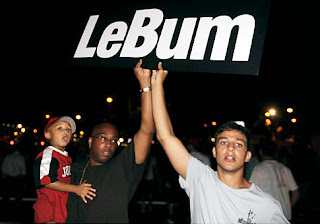 Outside of listening to "The B.S. Report" podcast hosted by ESPN's Bill Simmons I haven't followed sports on a regular basis for at least half a decade. That was until the three-headed monster of the Tiger Woods debacle, the World Cup and the endless scrutiny over the new home of LeBron James made ignorance of the current state of professional competition utterly untenable.
After James announced his decision to rob the Cleveland Cavaliers and home state of Ohio of his presence in favor of Miami yesterday I expected there to be some hurt feelings in the Buckeye State this day. What I did not expect was the statement issued by Cavaliers Majority Owner Dan Gilbert in reaction to the move. I won't even mention the unnecessary quotations and capitalization. These are the least of my concerns here.

Dear Cleveland, All Of Northeast Ohio and Cleveland Cavaliers Supporters Wherever You May Be Tonight;

As you now know, our former hero, who grew up in the very region that he deserted this evening, is no longer a Cleveland Cavalier.

This was announced with a several day, narcissistic, self-promotional build-up culminating with a national TV special of his "decision" unlike anything ever "witnessed" in the history of sports and probably the history of entertainment.

Clearly, this is bitterly disappointing to all of us.

The good news is that the ownership team and the rest of the hard-working, loyal, and driven staff over here at your hometown Cavaliers have not betrayed you nor NEVER will betray you.

There is so much more to tell you about the events of the recent past and our more than exciting future. Over the next several days and weeks, we will be communicating much of that to you.

You simply don't deserve this kind of cowardly betrayal.

You have given so much and deserve so much more.

In the meantime, I want to make one statement to you tonight:

You can take it to the bank.

If you thought we were motivated before tonight to bring the hardware to Cleveland, I can tell you that this shameful display of selfishness and betrayal by one of our very own has shifted our "motivation" to previously unknown and previously never experienced levels.

Some people think they should go to heaven but NOT have to die to get there.

Sorry, but that's simply not how it works.

This shocking act of disloyalty from our home grown "chosen one" sends the exact opposite lesson of what we would want our children to learn. And "who" we would want them to grow-up to become.

But the good news is that this heartless and callous action can only serve as the antidote to the so-called "curse" on Cleveland, Ohio.

The self-declared former "King" will be taking the "curse" with him down south. And until he does "right" by Cleveland and Ohio, James (and the town where he plays) will unfortunately own this dreaded spell and bad karma.

Tomorrow is a new and much brighter day....

I PROMISE you that our energy, focus, capital, knowledge and experience will be directed at one thing and one thing only:

DELIVERING YOU the championship you have long deserved and is long overdue ...

Perhaps any readers who are sports fans could fill me in: Is this type of statement a normal occurrence? If so I might pay attention more often.
Posted by Rob at 2:36 PM