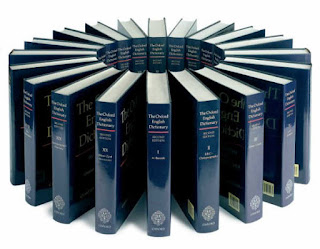 One of the scariest results of the slow, painful downturn in print media is the loss of permanence. Physical copies of books are, at the very least, something that can be passed down and referred to year after year. One of the comforts of a favorite book is the material space it takes up. Books frequently outlive their owners.
And now, the unkindest cut of all.
In an article titled "Internet may phase out printed Oxford Dictionary", Associated Press writer Sylvia Hui describes the latest causality of this war of attrition:


It weighs in at more than 130 pounds, but the authoritative guide to the English language, the Oxford English Dictionary, may eventually slim down to nothing. Oxford University Press, the publisher, said Sunday so many people prefer to look up words using its online product that it's uncertain whether the 126-year-old dictionary's next edition will be printed on paper at all.

While I find this incredibly distressing, the meat of the article centers around the online version of the OED. Of all the ways digital media has sought to "monetize" (how I cringe while I type that word) its content, this scheme has got to be one of the most successful. Even the New York Times couldn't make it work in the past, but the online OED seems to be doing quite well.

I am heartened by the news that the online version of this information has been so effectively valued. The reason it has value is another point altogether. Even as online subscribes shell out nearly $300 per year for the privilege, the reason it has value in the first place is because of the physical product. Without the foundation, the structure above is bound to crumble.
Posted by Rob at 12:33 AM