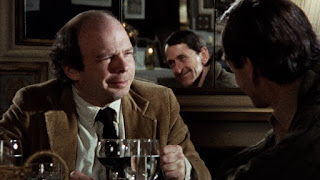 "They've built their own prison, so they exist a state of schizophrenia. They're both guards and prisoners and as a result they no longer have, having been lobotomized, the capacity to leave the prison they've made, or to even see it as a prison."
- Andre Gregory

"I've lived in this city all my life. I grew up on the Upper East Side. And when I was ten years old, I was rich, I was an aristocrat. Riding around in taxis, surrounded by comfort, and all I thought about was art and music. Now, I'm 36, and all I think about is money."
- Wallace Shawn


"My Dinner With Andre" is the most anti-movie movie I've ever seen. If you think of all the elements that make up a movie: plot, characters, scenes, sets, etc., this film fulfills almost none of these requirements. As the title might suggest, 95 percent of "My Dinner With Andre" consists of the entirety of a dinner conversation between playwrights Wallace Shawn and Andre Gregory at an upscale New York City restaurant. Prior to arriving at the establishment we see Shawn walking to the subway while he provides a voice-over explaining how the meeting came to be. Years before, Gregory had been at the top of his game in the theater world when he launched Shawn's career by featuring one of his plays. In the meantime, Shawn has continued to work steadily in the field while Gregory has all but disappeared, leaving on trips for months at a time. With Shawn's significant other Debby (Eisenberg) away at her part job as a waitress, the dinner with Andre will be the first meeting between the two in quite some time.
After Shawn arrives at the restaurant anyone in the audience hoping that the plot of film, such as it is, will keep moving forward in any meaningful visual way is in for a rude shock. There's only so many ways characters can be shown in a two-shot and Director Louis Malle cycles through nearly every single one of them at least twice over the course of the next 100 minutes or so. For those ready to accept this new reality, this represents a marvelous break with the accepted rules of the medium. In the absence of any visual cues the dialogue becomes almost wholly responsible for moving the proceedings along.
Another interesting point is that Shawn and Gregory seem to be basically playing themselves. All of the mentioned personal details of their lives seem to correspond perfectly to reality, but even this point is up for grabs once Shawn and Gregory start conversing. Gregory maintains that humanity has become increasingly habitual in all aspects of life, making everyone an actor in their own lives.
The two quotes included at the top of the article provide a representative summation of both characters' worldviews:
Gregory desires connection with reality in all aspects. He sees humanity's predilection towards science, reason and order as a futile attempt to find permanence. Man's attempt to fill our lives with constant static amounts to nothing more than a distraction from the inevitable fact of death. Gregory relates several extravagant adventures he's been on in search of this truth including being temporarily buried alive on Halloween, eating sand on a dune in the Sahara while attempting to adapt a theatrical version of "The Little Prince" and his dalliances with several dozen musical Pollacks in a forest.
By contrast, Shawn is much more grounded in his observations. He desires comfort and freedom from confronting the very realities Gregory runs toward. During the day he writes plays that force his characters to confront these facts, but in his off-time the electric blanket on his bed provides a small amount of comfort from these same issues. He is a working man who has goals, checklists and a routine. These things make him feel as if he has some kind of control over his life. He rejects Gregory's outlook as unrealistic as accomplishing these comparatively menial tasks is what makes life worth living.
"My Dinner with Andre" all but invites the viewer's imagination to work overtime, the very skill most commonly dulled when watching movies. Not only are their stories, especially Gregory's, incredibly descriptive and colorful, the conclusions they draw invite self-reflection from the audience. For my own part, I respect Gregory's outlook, but if I'm being honest with myself, I relate most directly with Shawn. I'm a journalist and I spend my working life wallowing in the misery of humanity so I can relate my findings to others. After the work day is done, I want to do nothing more than free my mind from the facts I've ingested. Much of who you agree with comes down to nothing more than perspective. Gregory has the means to travel to Europe and North Africa to find himself. Shawn has rent to pay and errands to run.
Like obvious "Andre" progeny "Waking Life", this film is a tightly-wound knot of ideas that requires multiple viewings to completely understand. I didn't find "Andre" to have a resolution as such. It merely raised a bouquet of questions I couldn't stop thinking about for hours after the credits rolled. I feel like I could watch "My Dinner with Andre" once every five years for the rest of my life and come away with a different conclusion each time.
Of course, one thing in this life is certain, you never go up against a Sicilian when death is on the line: