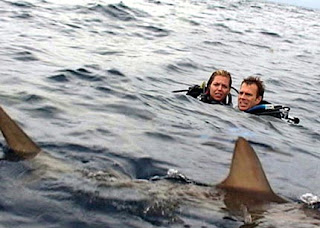 For the majority of its run time, Open Water exploits one of the most base human fears: the loss of control.
Daniel Kintner (Daniel Travis) and Susan Watkins (Blanchard Ryan) are a busy married couple who take a much-needed vacation. During their tropical excursion they decide to go scuba diving. As they board the boat a head count of 20 is taken by the crew. Once the vessel has headed several miles out from shore, it stops over a large coral reef. The ten sets of partners then begin to descend into the water when one of the passengers realizes he's forgotten his mask and is forced to stay on board. Meanwhile, Daniel and Susan spot an eel and begin to drift below away from the rest of the group. Back on the surface another diver has begun to have problems with his equipment, freeing up a mask for the forgetful tourist on the boat. The absentminded vacationer seizes the opportunity and takes to the water before the crew can take notice. This causes the original head count to become distorted as Daniel and Susan are now not counted at all. Satisfied that everyone has returned to the craft, the crew speeds away without Daniel or Susan. When they resurface they find themselves alone, that is except for the ever-circling sharks and jellyfish.
The log line contained in Netflix's description for Open Water reads: "The Blair Witch Project meets Jaws" which really just means: "another low-budget horror movie movie about a small group of people being attacked by an unseen predator, in this case sharks and, to a lesser degree, jellyfish." I don't think this is a completely unfair comparison, but it does leave our some of the most compelling reasons why Open Water is so terrifying. In both Jaws and Blair Witch the protagonists head out on their doomed excursions explicitly looking for the danger that eventually finds them. Open Water is the story of a couple that simply wanted a watery vacation where they'd get to pet some fish. In Jaws the crew of the Orca had guns and air tanks to fight off the great white they were after. The documentary film crew of Blair Witch not only had their camera equipment to comfort them, they had also packed supplies for a, albiet shorter, multi-day hike in the New England wilderness. Here Daniel has only a small diving knife and Susan a handful of breath mints.
And that's why I was legitimately scared by this movie: Floating in the ocean with no hope of rescue, predators closing in from every angle with no means of defense: my nightmares are made of these.
Posted by Rob at 8:55 PM