[Editor's Note: This challenge was posed by my friend and former coworker Monica on Facebook a few days ago with the following instructions: "Don't take too long to think about it. Fifteen movies you've seen that will always stick with you. List the first fifteen you can recall in no more than fifteen minutes." This was possibly the hardest thing I've ever had to do and (without meaning to) took a bit longer than 15 minutes to whittle down to the list below.] 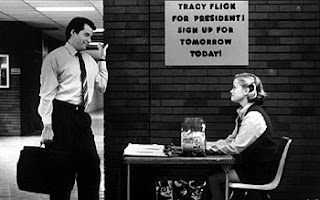 I love this movie for a lot of reasons. It's hilarious. It's perfectly cast. More than anything, though, it allows the audience to feel empathy for what would otherwise be a totally unlikeable character. If you heard the details of the plot condensed into a couple of sentences you'd hate Mr. McAllister (Matthew Broderick) and pity his put-upon student Tracy Flick (Reese Witherspoon.) Election is the 102-minute explanation I'm sure the subject of every quirky national news story wish they had a chance to deliver. 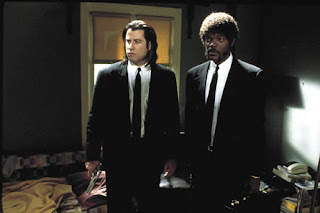 It almost seems like a waste of a choice to include Pulp Fiction on this list. Somehow it just seems too easy. But there's no getting around it: it's a great movie. 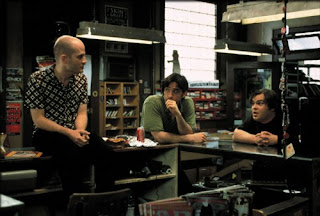 My love of High Fidelity confirms my belief that to truly connect with a piece of art it has to hit you at exact right moment. When I first absorbed this movie I was a tender-hearted sophomore in college who had just painfully ended his first relationship. I felt that somehow this movie was made just for me and no one else, like my name should have somehow appeared in the credits. I'm a happily married newlywed now, but High Fidelity still holds up.
Also, the main character's name is Rob. So you do the math. 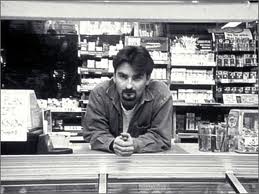 Years before director Kevin Smith made Cop Out or insulted me via social networking Clerks. was one of my favorite movies. I loved it so much that when Ash and I drove to New Jersey during our trip to New York City the most exciting part of the journey for me was our stop at the actual Quick Stop where it had been filmed: 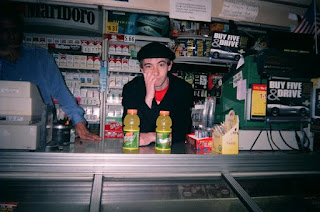 When I first saw it I hadn't seen anything else like it before. It influenced my sense of humor for years to come. If nothing else, Clerks. taught me that being witty didn't necessarily mean steering away from less genteel topics. 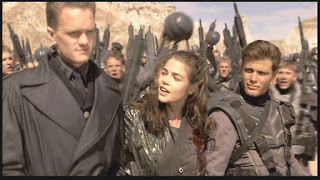 I agonized over whether or not to include The Thin Red Line on this list because it's my favorite war movie. My reasoning was that I should include at least one entry from this genre. Then I realized that Starship Troopers was already on the list, covering that base and several others. Not only is Starship Troopers the basic archetype for any gung-ho war movie (I mean, they literally dehumanize the enemy) there's also hilarious one liners in pretty much every scene.
"Hey, all I know is you shoot a nuke down a bug hole, you got a lot of dead bugs!" 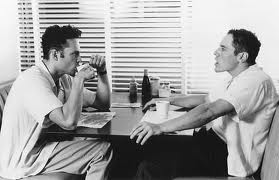 Another formative movie in my life. As I write these out I'm starting to get the impression that I think cinema sure was at its best in the mid to late 1990s and early 2000s. But that's also when I first defined my taste in popular culture. Perhaps there's a connection there somewhere...

Like fellow downers Requiem for a Dream and The Wrestler, Donnie Darko is a great movie that I can't bear to watch all that often. It's so gritty and depressing that I almost feel as if I've already seen it as many times as I ever want to. It's not because I don't love everything about it, it's just hit me so hard the first few times that viewing it again might be too much to bear.

Zombies are a favorite subject of mine and there's at least three or four other such films I wish I could include on this list. Shaun of the Dead is gets the honor because not only is it hilarious, its not actually about zombies. It's actually a touching coming-of-age story about relationships of every kind. Really! 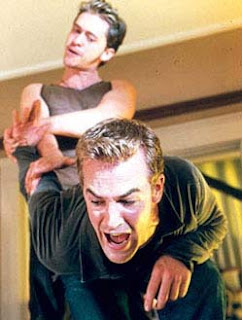 I used to place The Rules of Attraction much higher on this list. When I was in college I felt this movie basically defined me as a person. Since I've graduated, though, being this nihilistic and cynical looks less and less appealing. I still love it though and would argue that it's among the most underrated films ever. 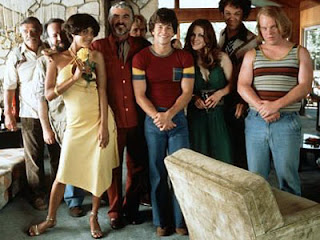 Paul Thomas Anderson is one of my favorite directors and while this may not be his technical masterpiece (that would be There Will Be Blood) Boogie Nights is by far the most fun to watch. I love everything about it from the music to the clothes to the acting (Don Cheadle! Mark Wahlberg! John C. Reilly!) The only problem is that its hard to express that to people without them thinking that you only showed up for the nudity. 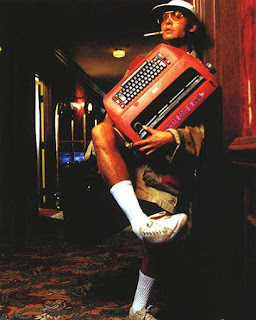 This is a case where you have so many good elements you can't really go wrong. Hunter S. Thompson is one of my favorite authors. Johnny Depp and Benicio Del Toro are among my favorite actors. Director Terry Gilliam was the perfect choice to bring this fantastical tale to the screen. I just can't get enough. 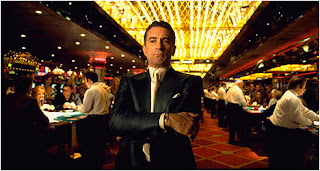 Goodfellas is by far more beloved as far as Martin Scorsese mob movies go, but I saw Casino first. Added to that, Casino is longer by about a half an hour so there's more of it to go around. Between the salmon-colored suits Sam Rothstein (Robert De Niro) wears and the suave dating techniques of Nicky Santoro (Joe Pesci) it's also one of the funniest movies ever. 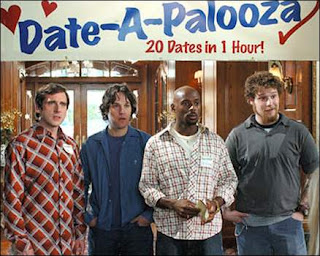 One of the most compulsively re-watchable movies in my collection. It never fails to make me smile. 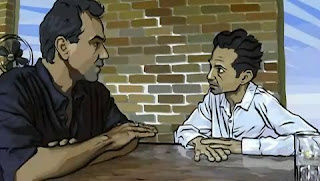 I've watched this movie probably a dozen times and I always get something new out of it. The rotoscopic style is so hypnotic it's easy to forget there's only a very thin plot. I always end up thinking about Waking Life long after the credits have rolled. 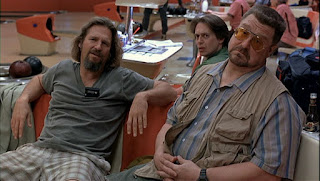 I was married by a Dudeist priest after walking down the aisle to Bob Dylan's "The Man in Me." When I get my first tattoo it will be over the word "ABIDE" on my right forearm. When the Lebowski Fest first came to San Francisco Ash and I and our friends Sean and Ryan jumped the line and got our picture taken with the real Dude (or at least the back of his head since he agreed to the picture and then completely forgot about it the next second and started walking away): 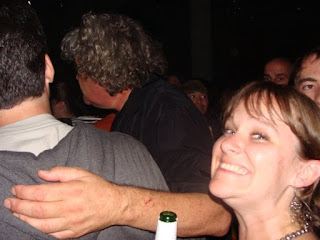 Is that enough evidence that this is my favorite movie of all time?
Posted by Rob at 2:43 PM