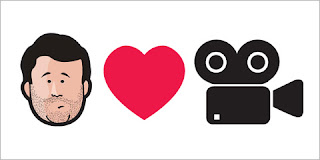 [Editor's Note: The following is the latest in a series covering my top 10 podcasts and my favorite episodes from each. Here's what we know so far:
#5 - Doug Loves Movies
#6 - Savage Love Podcast
#7 - Freakonomics Radio
#8 - The Moth Podcast
#9 - The Ricky Gervais Podcast
#10 - Fresh Air with Terry Gross]

I have a rule when it comes to Doug Loves Movies: I only listen to it when I am within the confines of my apartment complex. I intentionally do not listen to it while driving. I believe this is the only way to truly enjoy Doug Loves Movies. The effect of listening to it is the audio equivalent of a contact high. You could go about your day in the world and attempt to pay attention, but you'd miss half the fun.

I too loves movies so I never really get tired of the premise of Doug Benson and a few other funny people getting incredibly high and talking about film.
The Leonard Maltin Game, a semi-complicated game best described as Name That Tune but for movies, ends every show. Doug plays the host of the game, giving three different categories players can choose from. Each category contains three movies, identified only by their year of release. Players then bid in descending order about how many names they can guess the name of the movie in question. Doug uses the Leonard Maltin iPhone app to provide snippets from the review and the number of stars as clues. The bidding ends when the player who's turn it is asks the last player who bid to "Name That Movie." Doug then reads the agreed-upon number of actor names, from lowest-billed to highest. (For extra credit players can even say zero names or negative names, which means that not only do they have to name the title of the movie, but they also have to name that number of actors from the top down in the order that they were billed.)
Every episode is a blast, but when Leonard Maltin himself plays the Leonard Maltin Game and can't name that movie based on the clues that he himself wrote, the space-time continuum is reshaped into a Möbius strip.
The snake eats its own tail.
Posted by Rob at 4:56 AM