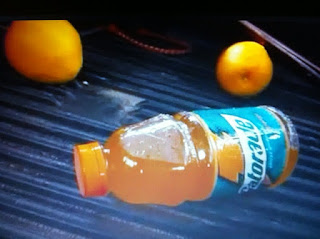 There will never be another movie like 127 Hours.
And maybe that's a good thing.
The true story of Aron Ralston (James Franco) is so excruciating to watch there is truly no way I can imagine every desiring to see this movie ever again. This Danny Boyle joint belongs beside other classy squirmfests such as Requiem For a Dream and Happiness in the one-hitter quitter category. The inevitable plane-into-the-side-of-the-mountain moment happens remarkably quickly in the run-time. No sooner has he left his house without taking his Swiss army knife or telling anyone where he's going, does he escort a pair lost female hikers to safety. Twenty minutes into the film and we're already trapped in the crevasse with Aron, his arm pulverized behind a giant boulder. And all he has to comfort him comprises of a video camera, digital camera, dull multi-tool, one bottle of water, his Capital One card--
Which brings me to one of the most distracting features about 127 Hours: the incessant product placement. During a dream sequence he images out loud how refreshing a Mountain Dew would be. When he has another hallucination he plots the route back to his abandoned car, only to find a sweaty bottle of Gatorade waiting for him. Another vision has him watching a beautiful woman sip from glass bottle of Pepsi. Needless to say, the PepsiCo family of products was well-represented here. I'm almost surprised we didn't see him eat a hearty breakfast of Quaker Oats and a Naked Juice to wash it down with and a refreshing Lipton Tea to finish. Once could almost create a drinking game of the corporate shout outs.
And believe me, you'll want to drink.
SPOILER ALERT: He chops his arm off with the dull blade of the Made-In-China multi-tool to get out.
But then, you knew that already, didn't you?
I don't want to give away the whole movie, but it may or may not surprise you to learn that we get to see the real Aron Ralston in yet another dream sequence at the end of the movie. I imagine that having James Franco play you in movie by the director of 28 Days Later couldn't feel that bad.
For all its problems, this is still probably just about as well as this concept could have been executed. Danny Boyle drags us down the hole and doesn't let us out until we've actually felt like we getting our own limbs severed. I flinched and moaned on several occasions, but I feel like they pulled off a really good movie. Everyone here is talented and determined: from subject to actor to director.
And in the end that's what counts: for whatever else anyone wants to say about Aron Ralston, one thing is true: when it counted he did whatever he needed to do to survive.
Posted by Rob at 12:56 AM