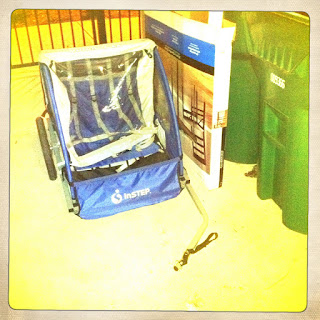 I noticed this whilst taking the trash out to the dumpster tonight. Fellow residents of my apartment complex often leave strangely intricate (READ: expensive) items in the recycling area, but this struck me as especially noteworthy. I looked it up and apparently this model retails for $199.99. And some is just giving it away for free ninety-nine? I don't own a bicycle to pull this with or children to strap into, if I had either I probably would have snagged it.
This person obviously either:
- Doesn't know what it's worth.
- Has money, knows what it's worth and doesn't care.
- Knows something terrible happened, knows how much it could sell for, but just wants to get rid of it.
If this was left in a Northern California dumpster a crystal meth tweeker would have already thrown their pack in the back and rolled away with it.
Meanwhile, Central Indiana doesn't seem to notice or care whether or not this is there.
Posted by Rob at 12:35 AM