Will there/should there be another Jackass movie? 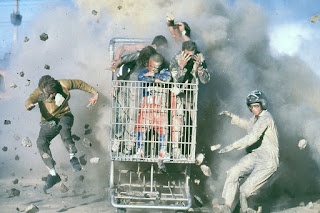 Surely this is the secret question that immediately popped into heads of everyone who cared upon hearing the news of Ryan Dunn's awful death Monday.
A couple of thoughts:

1) At some point along the way, all of the CKY/Jackass crew, and Bam Margera in particular had to have at least drawn up some rough mental sketch of this day. Watching the highlight reel of Dunn's early work it's a wonder he didn't perish sooner. (Feel free to mute the sound on this video.)

He certainty earned the title “daredevil”. Someone in this clique was bound to die some day doing something they shouldn't be doing. It was really just a matter of time.

2) Alcohol was definitely a contributing factor to this tragedy.
Alcohol was also definitely a contributing factor to the Jackass empire.
Miller was a sponsor of the film franchise as the performers were allowed to imbibe as much as they could keep down. At one point, Dunn even breaks the fourth wall and announces that he could sure go for a Miller High Life. Considering how things turned out it seems incredibly inappropriate in retrospect.
Big Daddy Cha Cha weighs in:


"That's too bad. I first heard about it when a coworker falsely reported to me that it was Bam Margera who had died in the car accident. Too bad for Roger Ebert; he was a little crass, perhaps. I assumed they would find Dunn to have been a little tipsy, but not like this, and Ebert would continue to be ridiculed. But at 140MPH, I think Ebert is completely justified for what he said. After all, it wasn't just the driver that was killed, and it's damned lucky that it wasn't a whole bunch more innocent people, considering that speed...
I may have to get around to checking out that latest Jackass movie now..."

3) There's too much money on the table for MTV and everyone else involved. Of course there is going to be another movie. The first film cost $5 million to make a returned $79 million. The second one more than doubled the budget still brought down $84 million. The bill for the most recent installment of $20 million was more than returned when it came home with yet another $170 million.

4) They really should not make any more movies. The bloom is off the bush. As Rick James as channeled by Dave Chappelle would say, "The milk has gone bad!" The central conceit of the show is now damaged. Every time I see Ryan Dunn all I can think of is how everything went pear-shaped for him in the end.

5) Then again, maybe they could pull off it and come off as classy. I'd be pleased if they were able to make it work. The degree of difficulty is quite high.
Posted by Rob at 1:30 AM