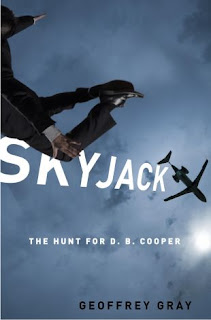 No offense, Geoffrey Gray, but I hope you never find D.B. Cooper.
The story is just too cool to let it be weighed down with gutting facts. Can we just believe in one thing as a nation? What good is any of this madness around us if someone can't casually board a plane, ransom the passengers for $200,000 (in 1971 money; $1.1 million today) and then lash the money to his chest with parachute string, all before making a leaping from the aft stairs of a moving jet with another parachute...and then become the ONLY skyjacking that has gone unsolved in the history of air travel?
If we catch D.B. Cooper then that's one more mythic story I can't believe in.
Can we just let him have the win? Hasn't he done enough?
As far as gripping narrative, though, Skyjack definitely delivers.
I don't want to spoil anything, but we still don't know who D.B. Cooper is to this day. That gives Gray the ability to have a non-ending feel satisfying. We know from reading this tome that if anyone put in the work necessary to find the answers if they were still there to be found, he would be the one who would have found it. You can't say he or anyone else who has carried the torch for this case throughout the years failed for lacking of trying.
Gray is also a really, really good storyteller. I've been interested from afar in the D.B. Cooper case pretty much since I found out about it. I have a vague memory of watching what would have had to have been this 1981 Treat Williams/Robert Duvall alternate history film: The Pursuit of D.B. Cooper. Ever since then I've been hooked. This narrative only once again stoked the fires of my interest. I'm a born conspiracy theorist and the idea that D.B. Cooper is part of some larger plot is definitely appealing. At this point, any theory is just as good as the next.
As a journalist, I appreciate the fact that to properly write a true crime novel, true and total commitment is necessary. Gray has that covered and then some.
But hasn't D.B. Cooper given back the value of the $200,000 he stole to our collective imagination countless times over?
Posted by Rob at 11:54 PM