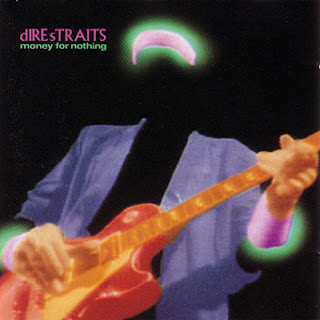 There are so many great things about "Money For Nothing":
- Co-writer Sting, yes, that Sting, sings an un-credited background vocal. That's great.
- The groundbreaking video still sticks out in my mind even though I probably first remember seeing around five years after it had already existed. The technology is long-outdated, but still completely compelling.

- Mark Knopfler is a musical genius and the guitar riff here at the center of this song is Exhibit A.
- "Money For Nothing" features the best use of the synthesizer since Van Halen's "Jump" (released just a year before, I'm sensing a pattern about mid-80's rock here.)
- The extended version is even more fun than the original by virtue of being eight minutes and 28 seconds of "Money For Nothing":

- The lyrics of the song are from a first-person perspective of someone who isn't culturally senstive or enlightened. As a result, the majority of this song's Wikipedia page is the controversy over several off-color references and slurs in the lyrics. This is the same reason sarcasm is so hard to pull off in print; people just don't get it.
Obviously, I don't think Dire Straits are homophobic, sexist racists. They're singing from the perspective of the person watching MTV while they have to MOVE the T.V.s. Don't you get it? They're the band on the MTV! It's obviously more awesome to earn money doing what you love instead of drudging away at the bottom.
But that begs the question, if there was no one to buy the color T.V.s would Dire Straits be able to keep living their lifestyle? The lower class needs the upper class needs the lower class. Oh, opposing economic theories!
Posted by Rob at 6:26 AM