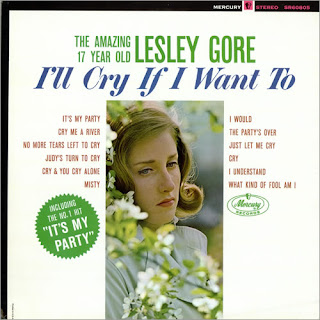 The past weekend I procured The Daily Ukulele fakebook from the library. As I made my played my way through the alphabetically-ordered songbook I came across the tablature for Lesley Gore's 1963 debut smash "It's My Party". I immediately played it about a half-dozen times, remembering how much I've always enjoyed this song more with each repetition. I first began my lifelong love of music in the car with my parents listening to the oldies stations (they wouldn't touch 80's contemporary pop music, at least around my brother and myself) and from copies of Time-Life Rock 'n' Roll Era cassette tapes my aunt would record and send me through the mail. (Come to think of it, Time-Life has formed the basis for a large amount of my understanding of the world.)
I've always appreciated the chord changes in this song. The verses actually sound like a girl talking to her friends at a party, her cadence revealing someone who is barely keeping it together. Then she, of course, loses her composure completely on the chorus. It's really a brilliant piece of songcraft (and probably not coincidentally the first big hit for future super producer Quincy Jones.)

The Daily Ukulele book lists the songwriters for each piece of music and I was amused to learn that "It's My Party" was composed by three men: Walter Gold, John Gluck Jr. and Herb Weiner. But the hilarity only increased when it was further revealed that not only was there a sequel to "It's My Party" called "Judy's Turn To Cry", but that the follow-up was written by two women: Beverly Ross and Edna Lewis. The difference between the songs is telling: in the original the protagonist has her birthday party ruined by her boyfriend, Johnny, who leaves for long stretches of time with Judy, who returns wearing his ring. The sequel picks up at some undetermined point in the future where our heroine explains: "Oh, one night I saw them kissin' at a party/So I kissed some other guy/Johnny jumped up and he hit him/'Cause he still loved me, that's why."
Let's review: when the men write for Lesley she's crying because her man totally went with another girl at her own birthday celebration. (Oh, snap!) And when women are the helm of the storytelling ship, they steer Ms. Gore towards another guy which causes Johnny to completely forget that tart Judy and give it to the unsuspecting patsy right in the kisser. I feel like a gender studies class could have a field day with this very thesis.

More hilarity: The corresponding album on which both these songs are featured, "I'll Cry If I Want To" features mostly songs about crying ("Cry Me a River", "Cry", "Just Let Me Cry", "Cry and Cry Alone", "No More Tears (Left to Cry)", etc.) and was rushed out after the sudden success of "It's My Party. Gore later came out as a lesbian making YouTube commenter starvetodeath123's post on the video for a live version of "Judy's Turn to Cry" ever so prescient:


"And when Leslie realizes she likes Judy, it'll be Johnny's turn to cry.﻿"