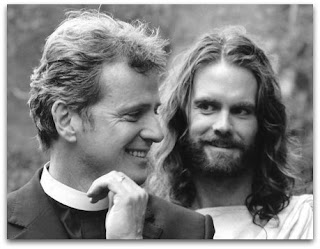 The canceled 2006 TV show "Book of Daniel" grabbed my attention because:
- It featured an Episcopalian priest as the main character. (I was raised in the faith.)
- It also featured a hallucination by said main character where he imagines he's talking to a not-very-good-looking version of Jesus.
We watched the better part (I think) of the pilot episode tonight. It was not good.
In fact, when I went to research the movie online I was shocked to find that most of the criticism of the show was from the conservative Christians. From the Wikipedia article:

A spokesman for the evangelical organization Focus on the Family compared the show's depiction of Jesus to a "namby-pamby frat boy", saying that "Having previewed the pilot and an additional episode, I find NBC’s new television show, The Book of Daniel, extremely repulsive in its portrayal of Jesus Christ and intentionally offensive in its flippant attitude toward behaviors almost universally agreed upon as unhealthy to society."

I will agree that the actor they picked to play the Son of God wasn't as cut as some other film Jesusi I've seen (I'm looking at you Jeremy Sisto.) But the real crime here is that it is just not a very good show.
I can just hear the log line now:
It's "7th Heaven" meets "Six Feet Under" meets "Joan of Arcadia."
How disappointing it is that people get all worked up over the wrong things. Their biggest concern is a frat boy Jesus giving a thumbs up to the gays when what they should be worried about is the fact this show is one big forced conflict. Gay son! Adopted son! Asian son! Marijuana-selling daughter! Pill addictions! Death! Affairs! Embezzlement! Hallucination! Jehova!
Real Episcopal days are hardly this action packed. Say what you want about us, but we know how to keep things in order in the end.
Posted by Rob at 2:00 AM