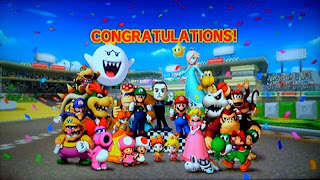 One of the main reasons I don't play our Wii as much I'd like to has a lot do with movement. This is to say, anything that involves getting off the couch after I've come home from work. I've waved my arms and jumped around enough just getting through the day without having a computer simulation that causes me just as much pain as walking to lunch.
But then Ash got me Mario Kart for the Wii with wheel remote and that all changed.
I just finished a record-setting winning streak in which I aced at the very least 15 races in a row. It's now official: I am a pro at the beginner level. Hold your applause.
I have never played any incarnation of Mario Kart before this one, but like "The Godfather" I just heard about it from so many people that I just assumed it was good. (Kind of like "Goldeneye" for the N64 also.)
Mario Kart is so fun for many reasons, but I think it mainly has to do with two things:
1) The innate hand-eye coordination that comes complete with associated muscle memory.
2) The universe it creates is out of control fun to look at.
The entire Mario empire is so steeped its own mythology that at this point it's like seeing an old friend. Even the fire levels with pyramids and the ball and chain monsters seems like a homecoming. ("Oh level two of Super Mario Brothers 3 how I've always despised you.")
Now we just need to get another circular control port for the other controller and it's going down.
Posted by Rob at 5:07 AM