This American Life: "Devil on My Shoulder" 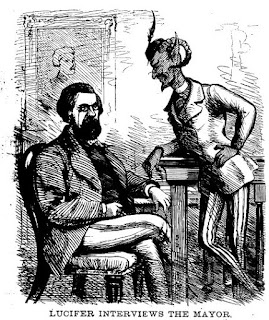 I'm listening to this week's This American Life episode and it is awesome. It's a repeat of an episode I've heard before, but it's one of my favorites. It's Episode 213 "Devil on My Shoulder" and if you haven't heard before, but do possess an hour of free time and a high speed internet connection should listen to it immediately.

Here's an overview of the program notes:

How does the Devil work? We hear stories from five different people who say they found themselves inexplicably doing something random and bad, something which made no sense to them at all. Host Ira Glass explains why this might be, cadging a bit from C.S. Lewis's The Screwtape Letters. (11 minutes)

Hilarious. I laughed so hard at this. We all have strong random emotions from time to time and this explains this perfectly.

Act One. It's Fun to Make Hell on Earth.

Trinity Church in Texas puts on something called Hell House every Halloween. It's like a haunted house, but each scene shows teenage church members acting out scenes of things the church considers sins. There's a homosexual dying of AIDS; a girl in an abortion clinic (on a doctor's table with fake blood splashed between her legs); a mom who leaves her family for someone she meets on the Internet. George Ratliff made a documentary about all this called Hell House. He plays some of his footage and talks about how effective it is, and how much of a thrill it is for the pious teenagers to act like sinners. (14 minutes)

Song: "The Devil Went Down to Georgia," Charlie Daniels Band

I actually saw an entire documentary about this phenomenon. Fascinating.
Sample line of dialouge:
"This is the rave slash suicide scene."

Act Two. Sixteen Candles Can Lead to a Lot of Fire.

Faron Yoder lives in Amish country in Indiana. When he was a teenager, like every Amish sixteen-year-old, Faron was allowed to abandon the restrictions of Amish life and live as a regular American teenager. It's part of an Amish tradition called rumspringa, which lets Amish kids drive cars and drink and party for a few years, before they decide whether or not to be baptised into the Amish church and live an Amish life. Now 21, Faron explains to Ira why most Amish kids decide to stay Amish after rumspringa, and why, at 21, he hasn't. He's featured in a documentary called Devil's Playground, by filmmaker Lucy Walker. (9 minutes)

Are you not entertained?

Act Three. Devil in Angel's Clothing, or Is It the Other Way Around?

The story of a man who committed a murder when he was a teenager. He got away with it, and didn't tell the police for twenty years. But then one day, for reasons that aren't entirely clear to him, he did. Reporter Sarah Koenig talked with him in prison, about what it's like to come clean after twenty years, but not even remember how or why. (21 minutes)

Song: "Devil or Angel, The Clovers; and Running with the Devil," Van Halen