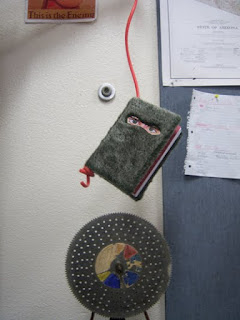 I am constantly amazed by my amazingly talented friends.
McSweeny's Internet Tendency, the online wing of the Dave Eggers-founded publishing house, recently held a contest to herald the release of Eggers' novelization of the classic children's book "Where the Wild Things Are." The book was meant to coincide with the now-in-theaters Spike Jonze film of same name. There was also a fur covered edition of the book, which was the subject of the contest described here.
(From McSweeny's):

AN EXPLANATION.
We didn't really know what to expect when the fur-covered Wild Things landed in our office. Sure, we had seen various swatches of fur sent as sample materials, but how it would all come together was still anyone's guess. But when we cracked open that first box, we were ecstatic. Like kids on Christmas, we each quietly retreated into corners of the office, and lovingly stylized our hirsute gifts with mohawks, comb-overs, and even outfits. What follows are some of our favorites.

A CHALLENGE.
We think you can do better. So we hereby issue a challenge: style your Wild Thing, title it, and send the under-2-MB effort to webmaster@mcsweeneys.net. We'll select a winner on November 16th, which we'll post on our website.

When the results were released today, my friend and former coworker Alan Birkmeier was listed as one of the winners (complete with picture featured above):

A special mention goes out to Alan Birkmeier's social studies class at St. David Middle School in Arizona, who submitted some hilarious photos. This one, made by Micheala Poole, was our favorite. Nice use of the table saw, Micheala!