Where have you gone, Sammy Sosa? 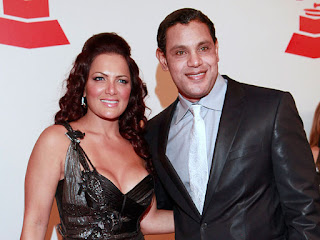 I think the height of my caring about organized, professional sports was the year 1998, when I was 15. That was baseball season when Mark McGuire and Sammy Sosa were embroiled in their famous home-run chase.

Since then I haven't thought all that much about Sosa. That was until just a few minutes ago when I stumbled across the picture you see above and the story you'll find below.

In this NPR Morning Edition piece from today, Sosa had this to say for himself:

Former Chicago Cubs slugger Sammy Sosa showed up at the Latin Grammy awards last week, looking much paler than usual. Speculation flew that he had bleached his skin or was suffering from a medical condition.

But in an interview Wednesday, the Dominican Republic native blamed a night cream and the bright television lights for the way his skin appeared. Sosa, who celebrates his 41st birthday Thursday, said he is not suffering from any skin illness.

"It's a bleaching cream that I apply before going to bed and whitens my skin some," he said on Primer Impacto, a program on the Spanish-language network Univision.

Sosa, who also wears colored contacts, said he uses the cream as a moisturizer and is in discussions to market it.

I don't know much, but I do know that whatever has happened to this poor man was not caused by either an excess of artificial illumination or skin products.

It would be like trying to tell me that the reason for Bob Dylan's appearance during the recording of this live version of "Tangled Up in Blue" was caused by a full-body immersion in a tub of flour:

Obviously, given our past experience with Sosa we know he doesn't always keep it 100 percent organic for the people. From a New York Times article from June of this year:

Sammy Sosa, who joined with Mark McGwire in 1998 in a celebrated pursuit of baseball’s single-season home run record, is among the players who tested positive for a performance-enhancing drug in 2003, according to lawyers with knowledge of the drug-testing results from that year.

Mark McGwire and Sammy Sosa engaged in a home run race in 1998 in which both surpassed the single-season record of 61.

The disclosure that Sosa tested positive makes him the latest baseball star of the last two decades to be linked to performance enhancers, a group that now includes McGwire, Roger Clemens, Barry Bonds, Alex Rodriguez, Manny Ramirez and Rafael Palmeiro.

Sosa, who is sixth on Major League Baseball’s career home run list and last played in 2007, had long been suspected of using performance-enhancing drugs, but until now had never been publicly linked to a positive test.

In a recent interview with ESPN Deportes, Sosa, 40, said he would “calmly wait” for his induction into baseball’s Hall of Fame, for which he will become eligible in 2013. But his 2003 positive test, when he played for the Chicago Cubs, may seriously damage his chances of gaining entry to the Hall, a fate encountered by McGwire, who has attracted relatively little support from voters in his first three years on the ballot.

But let's take a look at that shot one more 'gain: 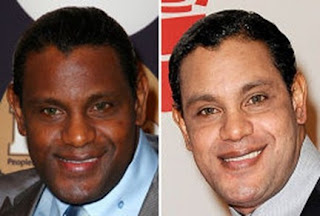 Skin bleaching is apparently quite common in some corners of the black community. This, from Science in Africa Magazine:

As many studies have revealed, society has a significant impact on the misuse of skin lightening agents. It is known that during slavery years, light-skinned people were often given preferable treatment as compared to their dark-skinned peers. In modern times, studies have indicated that the majority of black men prefer light-skinned women as partners, girlfriends or wives.

There are one of two possibilities related to why this has happened to Sosa:
1. This was an unfortunate accident caused either by his actions, simple genetics or some horrible vitiligo and lupus combination, à la Michael Jackson.
2. He meant to do this.

Either way I feel bad for him as no one is pointing out how well this all worked for him. I just wish Sosa was honest about why this is happening. Self-hatred? Bad luck? Whatever the real cause is, we will always assume the worst if we don't know the truth. Here's some advice though, stop trying to market this product, Sammy. No one wants to look MORE like you do now (even if that's not the real reason.)
Posted by Rob at 2:43 PM