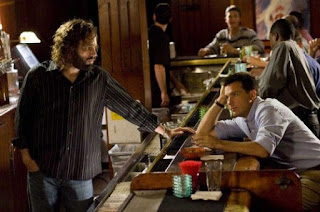 The combined forces of “Office Space”, “Beavis and Butt-Head”, “King of the Hill” and (especially) “Idiocracy” lay out a detailed overview of Mike Judge’s philosophy on humanity:
People are capable of amazing things but usually fall to their weaker impulses.
I don’t think it’s controversial to say that Judge has made himself perfectly clear on this point. There is a definite period tacked on the end of that sentence.
That’s what makes “Extract” so interesting:
Once you’ve already made your ultimate statement, where do you go from there?
I just want to go on record by saying that I like this movie. A lot of people won’t feel the same because it’s also a mess. Granted, it doesn’t have a strong message. If you’re a rich guy, though, I’m sure you can’t help but write about rich-guy problems.
Under the influence of horse tranquilizers, flavor extract factory boss Joel (Jason Bateman) is convinced by his best friend, Dean (Ben Affleck), to hire a gigolo to tempt his wife with. The idea is that once the cheating has occurred it will clear the way for him to sleep with a new temp at work, Cindy (Mila Kunis) minus any of the guilt.
What happens in the actual story is of no real consequence after this.
Nothing is really at stake here. You’re not going to have to worry about Joel making it in the end. It’s all very safe. This is not unlike how I imagine Mike Judge’s life to be.
Much of the case for this movie’s greatness lies in the casting department (via Wikipedia):

• Jason Bateman as Joel, the owner of an flavor extract factory
Pretty much just resurrects his “Arrested Development” persona. This is not a bad thing because I like Michael Bluth.
• Ben Affleck as Dean, Joel's best friend
Incidentally, Ben Affleck is really fantastic in this movie. As the best friend character he excels in a way I haven’t seen since “Dazed and Confused” and later “Chasing Amy.” This I’m sure he’s a cool enough guy, but he usually is only as good as the filmmaker.
• Clifton Collins, Jr. as Step, a factory worker who loses a body part in a freak accident and is due for a huge settlement
I’m always happy that he continues to work. His turn as Rupert in “Rules of Attraction” alone earns him a lifetime pass.
• Gene Simmons as Joe Adler, the ambulance-chasing attorney
He’s obnoxious. His character is obnoxious. Somehow it works.
• J.K. Simmons as Brian, Joel's partner
Another actor who I’m happy to see blow up everywhere. Like Bateman, he’s gotten a lot more indie cred post-“Juno”; and rightly so.
• David Koechner as Nathan, Joel's annoying neighbor
A classic Mike Judge archetype in the spirit of Milton from “Office Space”. He’s just another dim bulb wandering around bumping into everything.
• Beth Grant as Mary, an obnoxious factory worker
Most of the female roles weren’t quite as well-done. Mila Kunis and Kristen Wiig come off as kind of limp. Beth Grant is different because she is armed with a well-tested Southern persona. I would never doubt her
• Mike Judge (uncredited) as Jim, a union organizer employee at the factory
Judge brings back his Hank Hill voice here to great effect while in costume.

Plot-wise, the fact that Joel’s company bottles artificial flavor for sale is a perfect simile for what Judge does for a living:
He makes things (movies) that taste like something that is naturally occurring (reality) in a more concentrated form (writing.)
Really it would be disingenuous for him to write from the perspective of one of Joel’s employees. He doesn’t do that kind of work anymore. The main character is a boss whereas Judge has previously centered on entry level types. He has been in charge of employees for some time now and he can only write about what he knows.
Judge obviously still has great contempt for the human race, but he’s viewing it from a totally different angle. Frankly, I don’t think that’s such a bad thing. He already gave us “Office Space” after all. What else do you want from the man?
Posted by Rob at 5:08 AM