Movie Review: "Up In The Air" 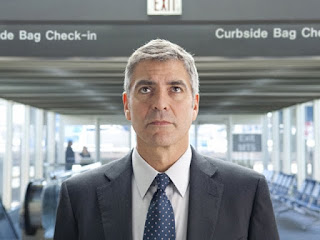 "Up In the Air" can be viewed as a perfect allegory for the state of the newspaper industry.
Ryan Bingham (George Clooney) is print media and his rival, Natalie Keener (Anna Kendrick) is online. (Their boss Craig Gregory (Jason Bateman) even refers to her work as "new media.")
Clooney fires people for a living, flying from city to city and delivering the pain so the resident bosses at whatever company he's at don't have to. This is cruel work, but at least he does it in person.
[On a side note, I will continue to refer to Bingham as Clooney because there is absolutely no mistaking the performance for anything else. I've seen a lot of Clooney movies and this is as Clooney as it gets. An acceptable subtitle might as well have been: "Clooney...Unleashed!" You've never Clooney be quite this Clooney before. I've always been a fan and this is nothing but a good time.]
Fresh off the college campus Natalie has a new plan that would ground Clooney for good. She wants to implement video firing so that all operations can be centralized. The soon-to-be-former employee is asked to take a seat in front of the monitor and camera and a packet of transition information is placed in front of them.
As terrible as this sounds, it is not unlike the idea that my former boss, MediaNews Group CEO Dean Singleton, expressed in a recent speech.
Via USA Today:

Newspaper publishers should consider consolidating and outsourcing news operations — even overseas — to save money as revenues continue to shrink, the head of a major U.S. newspaper company said Monday.
MediaNews Group CEO Dean Singleton, who also serves as chairman of the board of The Associated Press, told the Southern Newspaper Publishers Association that papers should explore outsourcing in nearly every aspect of their operations.
"In today's world, whether your desk is down the hall or around the world, from a computer standpoint, it doesn't matter," Singleton said after his speech.
MediaNews publishes The Denver Post, The Detroit News and 52 other daily newspapers and is well known for cost-cutting efforts, including combining many operations of its papers near San Francisco.
Singleton said sending copyediting and design jobs overseas may even be called for.
"One thing we're exploring is having one news desk for all of our newspapers in MediaNews ... maybe even offshore," he said during the speech.

Sounds like utter foolishness, right?
It is, but until Natalie's theory (and by metaphor Singleton's) is put into practice they refuse to believe that some jobs can be squeezed any further.
According to IMDb, Ellen Page was considered to play Natalie. Also, apparently Steve Martin would have been Clooney if he had said "no". The mind boggles.
Another interesting fact courtesy of IMDb:

With the exception of the famous actors, every person we see fired in the film is not an actor but a real life recently laid off person. The filmmakers put out ads in St. Louis and Detroit posing as a documentary crew looking to document the effect of the recession. When people showed up, they were instructed to treat the camera like the person who fired them and respond as they did or use the opportunity to say what they wished they had.

The script was also written eight years ago, but timing-wise the premise couldn't be more prescient. People are getting fired all over the place. This gives the entire proceedings a grounding effect that's refreshing.
In fact, if "Up In The Air" was playing right now on a Pandora playlist, it would have "Thank You For Smoking" right before it and "Wall Street 2" right after it. (This film made me want to see Oliver Stone's next movie even more.)
Being the chronological follow-up to "Juno" and "...Smoking", I've come to the conclusion that I just really like Jason Reitman's movies. He really knows how to put an entertaining show together. The look of his films is very warm and effectual to characters that most people wouldn't give a second look with a sympathetic eye.
Also, this movie has an excellent soundtrack, just like "Juno". In one party sequence we are taken from Naughty By Nature's "O.P.P." to "Good Times" to a live rendition of Young MC's "Bust a Move".
Still, clocking in at a healthy 108 minutes I feel that there could have been at least 10 minutes aggregate salami-shaved off this movie. Clooney makes it all worth sticking around for, but we could have definitely gotten to the point in a clean 90 minutes and called it a night.
.
But then again anything that's worth doing is doing right. Sometimes that means a little more investment of time and emotion. The quick and the cheap yield results that are just that.
Posted by Rob at 4:22 AM