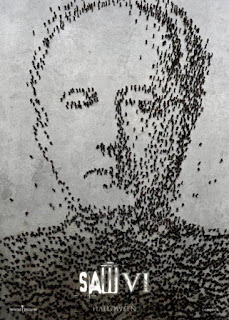 Jigsaw supports single payer health care.
"Saw VI" attempts to be current by addressing the health care debate. This injection of reality is meant to justify its existence. Otherwise, there is no reason for us to confront one more elaborate plot by Jigsaw.
The movie begins with two bankers who made bad home loans being forced into a macabre race to see who can slice off more of their flesh before 60 seconds is up. Later on, we find the latest victim, who is in insurance and is forced to make decisions up close and personal about who deserves to live and who deserves to die. The death of Jigsaw several sequels ago also plays a part as he is denied experimental medical procedures.
"Don't talk to me about money," he growls to his future victim, via a flashback. "I am money. This is about principle."
The fact that he is puppeteering these huge, labor-intensive traps from beyond the grave means that we are supposed to sympathize with Jigsaw. I agree with the moral of this story: that making money off human suffering is fundamentally wrong. I just wish there was a better spokesperson for this point of view than this.
Beyond the ripped-from-the-headlines facet, this diamond is very included. There are no surprises and the wooden, two-dimensional characters might as well be cardboard cutouts with plastic bases to hold them upright. Director Kevin Greutert moves them from scene to scene, loudly announcing, "oh no! WHAT might happen to them next. What sort of CHOICES will they have to make?" Also: "What does it all MEAN?"
It means that "Saw VI" cost $11 million to make and pulled in $62 million domestically at the box office. And that was the lowest grossing entry in the series.
Posted by Rob at 3:23 AM