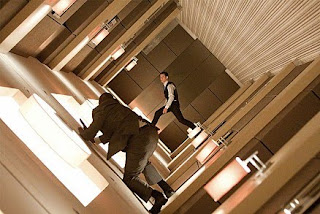 Director Christopher Nolan is a uniquely intricate non-linear storyteller. His plotlines often fold in upon themselves and chronology becomes as malleable as a fistful of Play-Doh. His jumbled technique would be distracting and unnecessary if Nolan were anything less than a genius. Luckily for everyone involved he is and "Inception" is an amazing movie in the tradition of Nolan's already legendary resume.
Since 1997, Nolan has been married to his producer, Emma Thomas. Thomas probably knows this better than anyone, but Nolan has a serious fixation with the sudden, violent, unexplainable loss of family. If his male main characters aren't becoming widowers (as in "Memento" and "Inception") then their parents are getting murdered in front of them (as in "Batman Begins" and "The Dark Knight"). This fundamental disruption in the characters' lives drives their increasing obsession with the search for truth and the nature of reality.
Speaking of mazes, the climax of "Inception" involves frantic shootout in a dream within a dream within a dream while leaving the possibility open for all of that to have been contained within a larger dream. (A great debt is owed to "The Matrix" as much as Nolan's previous work.) Memory and time are as elastic as the manner in which the tale is told. Time within each successive level of dream is increasingly stretched and distorted. This comes with an increased unreliability of the nature of the dream. The dreamer's subconscious is reflected in each dream's bit players. These "projections" will eventually attack foriegn dream inhabitants like white blood cells. This is inevitable in every dream and the tourists can usually only survive a finite amount of dream time.
(As a side note, Leonardo DiCaprio seems to be entering a phase in his career that I never saw coming: the mentally unstable leading man. The last Leo-Dio movie I reviewed post-viewing in the theaters was "Shutter Island" another twisty psychological thriller in which his interpretation of events is anything but rock solid due to previous close encounters with grisly death.)
With "Inception" Nolan continues his campaign against the assumption of ultimate truth as it relates to the human experience. Mental disorders plague the victims of his plot twists and make them unreliable narrators. Whether they can't fall asleep (like Al Pacino's character Will Dormer in "Insomnia"), they can't wake up ("Inception") or they can't make new memories (per Guy Pearce's Leonard Shelby in "Memento"), this lack of stability drives their incessant need to discern the real from the manufactured. Lies are constantly being told to them both by outsiders and, especially, the main characters themselves. Solving their own puzzles consumes them and in the process sucks everyone else around them into their schemes. These side characters always have their own motives, but in the end the blindfold the main characters wear is a self-inflicted handicap.
Posted by Rob at 2:32 AM