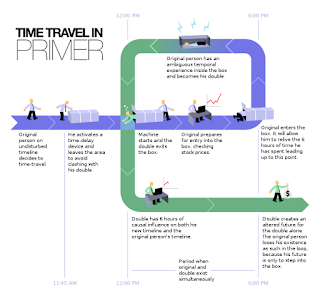 If you could change the past what would you do? More importantly, should you?
These are just a few of the seemingly endless number of questions raised by Shane Carruth's mesmerizing debut film "Primer". Even though it was written and performed in the English language, subtitles are absolutely necessary for anyone who isn't a genius-level engineer. The dialogue actively spurns the clumsy "and then this happened"-type expository speeches that litter lesser movies pandering to the lowest common denominators in the audience. Every scene is a clue to unlock a later one, making the finished product a scaffold of ideas so complex it's nearly impossible for it to be understood in one sitting. I won't pretend to understand even half of what "Primer" has to offer as I've only seen it once thus far. What I do know is that this film not only lends itself to repeat viewings, it downright requires it.
Setting-wise "Primer" springs from the same Texas soil of "Office Space". Like Mike Judge's over-educated office drones, the main characters in "Primer" are engineers in the Lone Star State who scheme of world domination in their free time. On the surface, the similarities end there, but it's worth noting the parallel as it frames the mindset of both plots. In essence, both films are about the ever-quickening spiral of destruction wrought by worker bees who have figured out a way to short-circuit the rules of their hives for their own benefit.
"Primer" is the story of Aaron (Carruth) and Abe (David Sullivan), one half of a four-man company called "Emiba Devices". The business is conducted in Aaron's garage, which also allows the members to pursue their own inventions. It is during one of these experimentations that Aaron and Abe accidentally create a time machine. However, the limits of the machine's power extend to the time that it has been turned on. After a careful solo expedition by Abe, he informs Aaron that he has constructed a pair of larger, person-sized versions of their discovery in a storage unit. Initially, Abe and Aaron are extremely cautious as to not disrupt the fragile nature of reality, but as time goes on this breaks down. They start by using this knowledge to play the stock market, but by the end of the movie they're preventing armed assaults at parties.
The rules of the universe of "Primer" are fantastical, but the central themes it meditates on are far more commonplace. Like Abe and Aaron, real science often hurtles into the unknown without regard for the consequences. Making money first and asking questions later is an all too familiar tale in the world of scientific innovation. (Remember Olestra?) This is pervasive in no small part thanks to the fact that infusions of cash are much more likely if the science in question is likely to produce a profit. It's a simple matter of incentives.
Extending beyond the world of the wrong-headed unleashing of untested discoveries is the film's statement on relationships. Even as Abe and Aaron are making cash hand over fist and playing hero to those they care about, the connective tissue of their own relationship slowly becomes completely unraveled. Every friendship is the culmination of all of the moments shared together. When these memories become unreliable, so does the future of the relationship. Surely even those in the audience who don't have access to time-bending machinery should be able to sympathize with the idea that tampering with the ecosystem of a relationship can result in complete collapse given enough time.
Posted by Rob at 1:52 AM