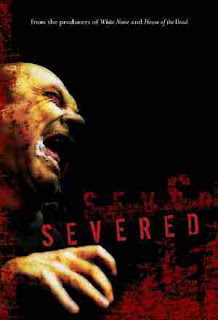 After years of unabated production, novel variations on the theme of zombies in film are increasingly hard to come by. Some highlights along the way have included slow, traditional zombies ("Night of the Living Dead"), fast-moving "zoombies" ("Dawn of the Dead" remake), demon-possessed zombies ("Evil Dead"), zombie babies ("Dawn of the Dead" remake again) and viral zombies ("28 Days/Weeks Later"). I went into Canadian horror film "Severed: Forest of the Dead" with my eyes open that the plot lines would fall apart long before the final credits mercifully rolled down the screen, but what made me take a chance was its unique zombie premise: A giant logging company develops a genetically modified fungus that causes trees to age three times as fast as normal. Everything is going to plan for the company until some of the trees are spiked by environmental protester Rita (Sarah Lind). When one of the loggers begins chainsawing a tree that has carries both the company's genetically modified sap and Rita's metal spike, the whirring blade swings back and severs a major artery. It is this accident that causes the logger's blood and the tainted tree excretions to mix and create a new breed of flesh-eating undead.
"Severed" was filmed in British Columbia and lends the cinematography a lush backdrop over which to splatter fake blood in every direction. The jaunty zombies depicted are an interesting mix of both classic and contemporary renderings of the hungry undead. The cause of the zombie outbreak is one I've never heard of before and is an interesting break from traditionally accepted causes.
Meanwhile, back at company headquarters, the company's CEO sends his son, Tyler (Paul Campbell), to investigate the problem. The moment Tyler arrives in the company-owned forest he discovers the zombie apocalypse well under way. He quickly finds shelter in what looks to be an abandoned hermit abode along with a rag-tag group of survivors. The hippies and the loggers who had been at previously been at odds now must fight for survival against the zombie threat.
Predictably, the logic train of "Severed" sails right off the tracks into the dark ravine of incomprehensibility, but what is remarkable is how long it takes to do so. It's reasonably well shot and despite the minimal acting and dialogue power on display the first 66.6 percent of the movie is relatively watchable. The increasingly diminished group then reaches the front gate of the property. They find that the entrance has been locked by the logging company who has now figured out what has transpired.
This is when the movie completely falls apart.
Head logger Mac (Julian Christopher) informs his newly-formed posse that the only other exit is behind another mill on the other side of the property. Once they traverse the 25 to 30 miles that separate the two camps they are captured by an all-male group of loggers who have developed a violent, "Lord of the Flies" style hierarchy. Entertainment in this sister encampment consists of treating captured zombie versions of their coworkers as clay pigeons in a macabre version of skeet shooting. This diversion is completely unnecessary and is also a fairly blatant ripoff of the third act of "28 Days Later", released only three years prior.
(And another thing: how did they create this violent social order so quickly? Even if the people involved decided this was the way things would be once the dead began to rise, the infrastructure of the zombie pen alone would have taken much longer than the handful of days since the outbreak began.)
Despite the enormous structural problems that plague the foundations of "Severed" the worst thing a zombie movie can be is predictable; and I certainly never would have seen this coming.

BONUS: Apparently you can watch "Severed" in its entirety on YouTube by clicking here, but you must confirm that you are above 18 years of age by signing up for an account.
Posted by Rob at 12:31 AM