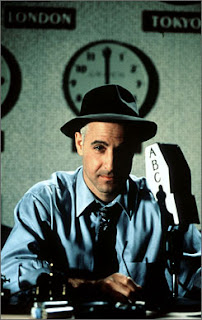 Like fellow '90s biopic "Ed Wood", the Made-for-HBO movie "Winchell" paints a sympathetic portrait of a generally reviled artist. Both Wood and Winchell made notably bad art in their chosen fields, but they did it incredibly unique ways, Wood with movies and Winchell with his gossip column.
Walter Winchell, here portrayed by Stanley Tucci, basically created the celebrity-obsessed culture of tabloid "journalism" that has grown like mold to cover the end-caps of every cash register in every supermarket in America. Even at his most successful he didn't even write most of his own material, as evidenced by the character of Herman Kurfeld (Paul Giamatti) who acts as Winchell's head ghostwriter.
Director Paul Mazursky breezes past the first two decades of his professional life in the beginning of the movie, assuming the viewer is well familiar with this most famous portion of his career. Instead the crux of the plot becomes Winchell's early opposition to Adolf Hitler and Nazi sympathizer/American hero Charles Lindbergh, at the implied behest of Franklin Delano Roosevelt (Christopher Plummer). The publisher of the newspaper publishing Winchell's column, William Randolph Hearst, is perturbed by this as he owns business interests in Germany in addition to being friendly towards both Lindbergh and Hitler. Winchell, a Jew himself, carries his verbal campaign against the Axis powers to the radio after his column is dropped altogether. He then joins the military after war breaks out, only to be called home FDR to once again write his insanely popular column.
This proves to be the highlight of Winchell's professional career. After capturing attention as a serious commentator with his Nazi opposition, he then turns his sights to the threat of Communism. He aligns himself tragically with soon to be reviled Wisconsin Sen. Joseph McCarthy as his House Un-American Activities Committee ruthlessly seeks to root out suspected communists. What follows is a fairly predictable slide into television and the kind of vaudeville sideshow Winchell first found success in at the start of his career. His family begins to fall apart as well when his son commits suicide on Christmas 1968 and then his wife dies a year later. When Winchell himself dies of cancer in 1972 only one person attends his funeral. Roll credits.
While I appreciate this movie's intentions, it doesn't make a compelling case for Winchell's legacy. The list of admirable qualities assigned to Winchell by this movie are as follows (while my commentary is parenthetical):
- He invented new words to suit his own purposes, which some found objectionable, but others in the literary arts found exquisite. (I do think it's interesting that he warped the English language to suit his own needs.)
- He was one of the first writers anywhere to condemn Hitler and his anti-Jewish policies. (Hitler was not really that hard of a target to hit, though I appreciate his efforts.)
- He communicated with the common man without talking down. (Even though the movie seems obsessed with glorifying the populist appeal of his sleazy tone, you only need to look at the current state of media to see the results.)
- He loved his country and fought during World War II. (I do respect his service.)
- He was a smooth talker and a snappy dresser. (Who doesn't like Stanley Tucci, right?)
For decades Winchell slung tawdry bullshit on his way to becoming the most famous columnist in America. He paid for information. He buried stories. He blackmailed people. And all the while he wasn't even writing most of what he became famous for.
Still, his contributions to the turn in public sentiment against Hitler, who called out Winchell by name as an enemy to a "new" Germany, and to the English language won't soon to be forgotten.
But ask yourself this: does that make up for us being forced to know who the Kardashians are?
Posted by Rob at 1:37 AM