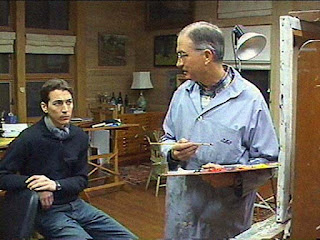 Born Rich, Johnson & Johnson heir Jamie Johnson's incisive look at the secret lives of the progeny of the upper upper class, isn't quite as shocking as you'd believe based on the controversy surrounding it. In the first 15 minutes of the film the family's legal counsel advises Johnson to tread lightly or not at all while gathering interviews for the documentary. Johnson's father, James Loring Johnson, encourages his son to drop the project altogether and instead start a "career" in collecting antique maps. Sure enough, by the end of the scant 75 minute run time we find out that one of the subjects featured in the film, Luke Weil, heir to the Autotote gaming empire, has sued Johnson for defamation of character before the final product is even released.
Born Rich is, however, a fascinating look into the ways those who don't have to work for a living spend their days and nights. Some of the insanely wealthy children, Ivanka Trump in particular, seem remarkably well-adjusted to their station in life. Others, like S.I. Newhouse IV, heir to the Condé Nast Publications fortune and grandson of Samuel Irving Newhouse, Jr., and Josiah Hornblower, of the Vanderbilt and Whitney families, face wildly conflicted feelings about their good fortune.
The most interesting dilemma these people seem to face is the gaping void between how their ancestors amassed their wealth and how their descendants maintain it. Before each subject is interviewed they are asked to explain the circumstances of their family's rise to power. During this recounting, black and white photos are often shown on screen picturing men with handlebar mustaches leaning against modest storefronts as horse-drawn carriages traverse the avenue a few feet away. These were obviously hard-working people, many of which traveled oceans and uprooted their families to unfamiliar continents to make a better life.
Flash forward to the present and the biggest problem for that same family revolves around deciding which after-hours function in the Hamptons would be most suitable for that evening's festivities.
It sounds exhausting.