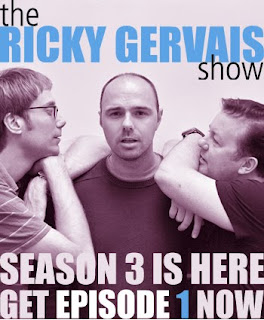 [Editor's Note: The following is the latest in a series covering my top 10 podcasts and my favorite episodes from each. Here's what we know so far:
#9 - The Ricky Gervais Podcast
#10 - Fresh Air with Terry Gross]

The Ricky Gervais Podcast was probably the first podcast I ever downloaded with any regularity. The medium was so foreign to me at the time that I didn't use iTunes to download it, nor did I have an MP3 player to upload it to once I did. It was stunning to me that one of my favorite comic actors would simply talk for nearly an hour at a time for free. (Of course, they later started charging for it, but who's counting?) The Ricky Gervais Show still holds up half a decade later. However, I can only stomach small doses as Gervais' aura is the definition of abrasive.

The show's secret weapon is, of course, Gervais and writing partner Stephen Merchant's foil Karl Pilkington. The constant abuse laid upon his orange-shaped head is either naturally deserved or completely orchestrated. Either way Pilkington plays his Stephen Wright-like bemusement with existence to the hilt. If a primer on the series is what you're looking for, you could do a lot worse than this massive Best of Series One digest podcast.
Posted by Rob at 8:11 PM