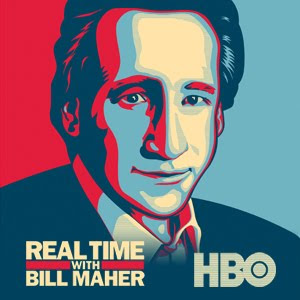 [Editor's Note: The following is the latest in a series covering my top 10 podcasts and my favorite episodes from each. Here's what we know so far:
#4 - Real Time With Bill Maher
#5 - Doug Loves Movies
#6 - Savage Love Podcast
#7 - Freakonomics Radio
#8 - The Moth Podcast
#9 - The Ricky Gervais Podcast
#10 - Fresh Air with Terry Gross]

Bill Maher has become one of my ideological heroes over the last few years. This is in no small part to his HBO show, Real Time with Bill Maher. His voice represents one of the few liberals who are completely unapologetic about basing their strident arguments on facts. Not only does Maher say what everyone else should be saying long before most even think about it, he is also hilarious. Added to that, Maher makes an effort to include conservative and moderate panelists.

Now, here's the problems I have with this podcast: The audio version is often intentionally chopped up by editing. Some jokes are completely cut out and only the sudden, uproarious laughter presumably in response to it. I believe that since this is on HBO, a pay cable channel, that I am being punished for not paying for the video version. I can't really argue with this logic since I haven't shelled out one cent for any of these podcasts, but it is rather jarring since it only happens every other time or so.
Also, sight gags are at least 20 percent of the fun here and the audio version leaves little clue about what is on screen that is provoking such an action. Episodes such as when Zach Galifianakis smoked a joint during the debate over Proposition 19 in California I only heard the audience whoop with disbelief.

If you want to know where to start with the show, any show in either the lead up to the 2008 presidential election or immediately after the Honeymoon with Obama was over. Maher first fully supports the president and then takes him to task for not being all he's been promised.
Posted by Rob at 2:09 AM