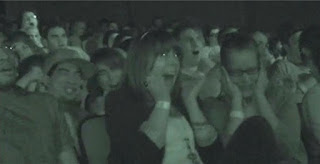 The first horror movie I ever saw in theaters was The Blair Witch Project. My friend Jonathan and I were so riveted that we filmed our own reenactment once in the woods behind my dad's house. I have a sentimental attachment to the genre of horror movies predicated on the "real" public display of discovered footage of the dead and presumed dead.
This form of expression is second cousin to the mockumentary. (The Office, Best in Show) When applied correctly the effect is primal. Your suspension of disbelief is the price of admission.
But Paranormal Activity could be subtitled When Keeping It Real Goes Wrong.
There's nothing wrong with this movie that some recasting couldn't solve. Heather Donahue, Joshua Leonard and Michael Williams oftentimes look Shakespearean in hindsight compared to the on-screen action on display here. Another advantage in favor of Blair Witch: the woods were endless; this house, however, is certainty not. And the characters know it. And so do we, from the very first scene to the last.
The film begins with a inscription thanking the families of Micah Sloat and Katie Featherstone as well as the San Diego Police Department. Here's the thing: if anyone actually had found footage of people being murdered or led to their deaths, releasing it theatrically would be so transparently exploitative that no one would try it. Even Werner Herzog wouldn't air the tape of Timothy Treadwell and his girlfriend being eaten by a bear in Grizzly Man. In fact, he advised the owner to destroy it after listening to it through headphones.
Although, it would take a swap from Katie Featherton and Micah Sloat to Meryl Streep and Robert De Niro make this concept work. The point is: once you've seen Blair Witch, and even Cloverfield, what are you supposed to do with this?
Although on a budget of only $15,000 they made a film that grossed $193,355,800. So what do I know?
Posted by Rob at 7:51 PM