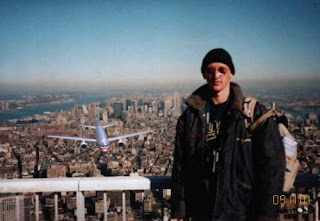 Hey, remember this guy from your Junk E-mail folder from about 9.75 years ago?

I completely missed the entire sequence of events the first 9/11, so why would my observance of the 10th anniversary be any different? The clock in the corner of my screen says it is 10:14 p.m. That makes sense, me publishing this article with just minutes to spare until it's 9/12; given my history with the date.
On the morning of September 11, 2001, I was attending one of my twice-per-week laboratory sessions. It was the start of the first full month of my academic career at Indiana University in Bloomington, Ind. It was just minutes before 8 a.m. when I raced to the bike rack on the eastern side of Teter Quadrangle, unlocked my bicycle and sailed down the steep alleyway that was/is North Teter Drive. I crossed 7th Street and continued onto Sunrise Drive. I quickly put on the brakes. After lashing the contraption to the rack outside the School of Education building I power walked in through the side entrance.
And there I stayed from just a few seconds after 8 a.m. until 11:13 a.m.
Meanwhile, during this time history as we know it was changing forever.
Later people would tell me of watching CNN live at 9:03 a.m. and seeing the American Airlines Flight 175 nearly explode through the opposite side of the south tower. And me? I was obliviously being bored to tears by a recreation of grade school science experiment involving measurement of liquids.
The class actually ended at 11:15 a.m., but one of the teacher's assistants came into the room shaking and holding a piece of paper. We could see her face was red and flustered. She had been crying very recently. As she spoke, she began weeping again.
She related the gory details in a clipped tone. Hijackers had flown planes into the World Trade Center building. They've both collapsed. The Pentagon has been destroyed. There might be another plane down.
Suddenly the work in front of us seemed even less engaging than before.
But as people began quietly and not so quietly freaking out, the stern-looking male/female pair leading the class sought to quiet the classroom. We still had work in front of us, finish your assignments please.
I can't believe this, I thought to myself. The world might very well be ending and I'm going to die right here on the hard metal stool.
But being completely shocked, me and everyone else in the classroom did as we were told, finishing the worksheet and leaving the class in a rush.
Back at Teter Quad, every television was blaring and the same images kept playing over and over again. People were losing their minds.
Nonetheless, the entire day the university refused to cancel classes.
Being the meek and mild freshman I was, I dutifully cut through the campus in chaos and managed to show up for my afternoon English class. I was only one of about six of what is usually at least a 20-strong classroom who bothered to show up. The graduate student assigned to teach the class could barely keep it together the whole time we were in there, which only turned out to be 15 minutes. After managing to squeak out a few barely coherent phrases, she dismissed those of us who had obeyed and attended.
She thought it was best that we deal privately.
So, today, 3,652 days later, what did I do? I woke up just before 7:15 a.m., drove my car to work, arrived just before 8 a.m. and didn't get home until around 5:30 p.m.
Tradition intact.
Posted by Rob at 10:51 PM