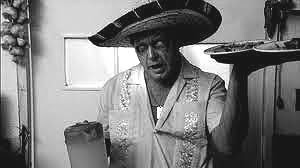 The genre of zombie movies is a very capitalistic system.
In both, constant expansion on the preexisting condition is essential to its success. This phenomenon can, and does, create economic bubbles that inevitably burst. This can lead to stagnation and regression in the future.
But every once in a while the entrepreneurial spirit not only pushes the envelope, but tosses it right off the table.
Aaaah! Zombies!! (later re-titled Wasting Away) is a shining example of this concept. The zombie paradigm has been poked and prodded at so many ways it's hard to believe that anything fresh could be wrung out the concept. But just as the invisible hand of the market drove Domino's to stuff cheese in the crust, so this lack of other options produced this movie.
Aaaah! Zombies!! prods more deeply than any other film before it a concept its predecessors only hinted at: the first person view of the zombie condition.
To my knowledge, this is the most in depth exploration of what it's like on the other side. The reason the zombies start in this movie is not unlike the Rage virus in 2002's 28 Days Later: government-created biological warfare gone wrong. That doesn't really matter here. (Well, it does to the plot of the movie, but it doesn't contribute to what makes this movie extraordinary.) Regardless, when the core group is infected the movie goes from being in black and white to color. The rules of the movie are as follows: When it's from the zombies point of view, everything is in in color. Conversely, what the zombies look like to the non-infected humans around them is presented in black and white. The zombies don't realize they're zombies. In fact, they think the humans are the infected ones. Zombies appear to be lumbering corpses to the rest of humanity, but the from the zombie POV the humans are moving and talking extremely fast.
Who has ever gone there before or since?
This film is worth seeing if for no other reason this: if you or I or anyone saw it late night on television, one would almost think the whole thing was a dream. There is no comparison for this movie. This movie has no point of reference except its own.