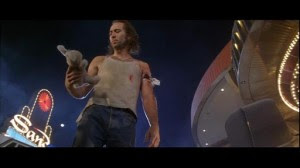 "If I made films for the critics, or for someone else, I'd probably be living in some small Hollywood studio apartment." — Jerry Bruckheimer on why he makes films

There's a point in every Jerry Bruckheimer movie in which I realize I have no idea what is happening. There is so much random action flying every direction that I have simply lost the plot. That moment often happens more than once during the run time. While I was watching Con Air, another Bruckheimer production, this happened a sum total of three different times, mostly within the last 20 minutes.
I can't totally hate every piece of entertainment Bruckheimer places his hands on. But I will never forgive him for Pearl Harbor. I liked some of his comedies like Bad Boys I and II, The Ref and Days of Thunder (which is supposedly an action movie, but is actually an unintentional comedy.) There's always been something unnameable that's put me off about Con Air. Like Armageddon, he once again places a group of actors I really like into a giant flaming plane. Released a year later, Armageddon would make these actors fly much higher, but a lot of the same plot points still apply.
Bruckheimer's style is on full display here. Con Air is really the gangster and the gentleman that he can be and often is. Con Air has a great hook: parolee on his way home is stuck on prison transport that is being hijacked. How can you not be interested in that plot line? The story is well set up and, however ham-fistedly, he establishes legitimate back-stories for the majority of the main characters, mostly the prisoners.
But it's really only things like budget that restrains him. It certainly isn't good taste. He controls the movie like a 13-year-old boy would if you gave him $75 million and said, "Go!" He can't wait to blow something up or crash something or kill off a few side characters. This is where I start to lose it. And this is the problem: because these types of movies make so much money there's no reason for anyone to tell him to stop.
I didn't see Con Air in the theaters. I was 14 at the time and for whatever reason I didn't make it. I didn't see it until years later when I saw it on VHS, or maybe on T.V.; who can remember? I think that's part of the reason I missed being the target audience for this movie. It really had the highest potential for hitting home when I was on the onset of puberty. For example, when I said earlier that the main characters were well developed I was definitely talking about the male characters. The women characters, which I guess just includes Nic Cage's doting wife and the cross-dressing prisoner, are pretty paper-thin, one-dimensional caricatures. [Editor's note: Ash pointed out that there were two other female characters I left out; Guard Debbie Bishop and Debbie, the six-year-old girl who has the tea party with Garland 'The Marietta Mangler' Greene. I add them here for completeness reasons, but I think the fact that I forgot about them only further proves my point. Also: They're both named Debbie. How lazy can you be!?] It's written like it's from the perspective of someone who had never met a transvestite, homosexual or actual woman before. Just like an early teenager. But that's obviously not true. Bruckheimer was 52 when he produced Con Air.
I've got to say I have something of a beef with any movie that will at one moment hire Dave Chappelle in his prime to be a supporting character and then just disposes of him out of the back of the plane so early in the run time.
Con Air is an anomaly this way. It's like Bruckheimer knows what would be a good idea then he's like, "but what about a 'KA-BOOM' right there?"
Posted by Rob at 1:46 AM