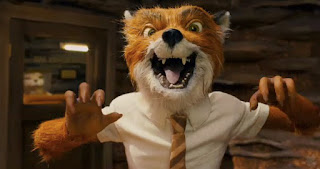 I am a more than a little hesitant when it comes to the idea of indie directors tackling beloved children's tales. That emotion probably springs from my experience with the 2009 Dave Eggers/Spike Jonze collaborative film adaption of Where the Wild Things Are. When I read that book as a child I definitely didn't picture the voice of James Gandolfini being wordy and depressed throughout the wild rumpus. It's like they couldn't help themselves. They had to repaint this wild imaginary ride as this self-congratulatory, heady nostalgia trip.
However, Wes Anderson's Roald Dahl adaption Fantastic Mr. Fox, released the same year, is a blast to watch. It falls into none of the pitfalls that its counterpart was practically leaping into willingly. It's a children's movie that I wouldn't mind re-watching with my as yet non-existent kids, mostly because I'd want an excuse to see it again.
This feeling of kinetic energy is influenced by Anderson's willingness to defy expectations of what a movie like this can be. In a world of Pixar it's endearing that he chose to make his first children's movie in stop-motion animation. Who even does that anymore? I always enjoyed it when I saw it in old movies. I used to rent the 1933 version of King Kong from the library when I was a kid and I was obsessed with the way the stop-motion made the fur move so jauntily. It's like the difference between vinyl and CD. There's something special about hand-made craftsmanship.
Another aspect that I'm so glad of: this is without a doubt a Wes Anderson movie. You'll recognize the staging and the camera angles instantly if you've spent as much time watching Rushmore and The Royal Tenenbaums as I have. Because this is a Wes Anderson movie you can expect to be treated to the usual suspects: Bill Murray, Jason Schwartzman, Owen Wilson and, why not, Meryl Streep and George Clooney thrown in as well. The Streeper is one of the Actresses of her generation and you know how I feel about Clooney.
And just like every other Wes Anderson movie, details are very important to the overall aesthetic. Instead of writing without curse words, Anderson replaces the word "Curse" in the exact location of each potentially objectionable word. This is self-aware and very funny because everyone knows what he's trying to say, but he doesn't have to get weird or creative twisting the sentence around the natural flow of speech that generally contains everyday swearing.
Animals are allowed to be animals as well anthropomorphic stand-ins for human characters. After long spats of dialogue the animals will instantly break back into animal character and loudly and messily devour a plate of food in front of them, crumbs flying in every direction. Or a contentious business meeting will end in an inter-species brawl. And when they're digging underground they're all claws and feet, even as they wear foppish people clothes while they do it.
All these small touches are what makes Fantastic Mr. Fox what it is. Doing a children's movie can be inherently tricky territory for directors used to speaking directly to adults. This movie works in no small part thanks to Anderson's ever-deft control of tension and its release. He knows just how far to let the pressure build before popping the bubble and bringing the proceedings back to earth.
Posted by Rob at 1:20 AM