[Note: This is the only complete copy of the movie I could find online that I could embed for free. The sound is a remix and not the original, sadly. Feel free to mute above video as sound isn't completely necessity for enjoyment.]

I was simply not ready to see this movie when I was 18 years old.
I first saw this sometime around the second summer I worked as a counselor at Waycross Camp and Conference Center.
It has been said “Fantastic Planet” is an allegory for the Soviet occupation of the Czech Republic . I highly doubt the counselor who showed me this knew that, at least not when I first walked in on a showing of this in the Staff Room. (Or was it a staff party?) [UPDATE: According my friend and former coworker Kevin, it was first screened at the staff party at the conclusion of the summer of 2001 held at his house. In which case, it's no wonder I don't remember it.)
The animation here is truly terrifying. Roland Topor was a French surrealist and architect of the film’s design who has clearly done more drugs than anyone I’ve ever known.

BONUS:
It has even inspired producer/rapper/man of mystery Madlib (a.k.a. Quasimoto, a.k.a. Beat Konducta) so much so that he made an entire song using samples from the movie. 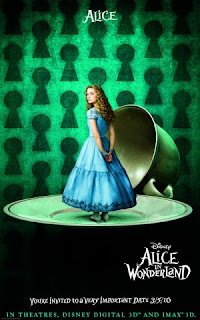 Most everything you need to know about "Alice in Wonderland" can be found in the Internet Movie Database entry's "Trivia" section. Some selected entries:

- This film marks the 7th time Johnny Depp has worked under the direction of Tim Burton and the 6th time for Helena Bonham Carter.

- After the defeat of the Red Queen, The Mad Hatter does a dance and his head starts spinning. Just like Tim Burton's Beetlejuice.

Next, here's a list of selected movies from Burton's directorial filmography on IMDb; organized by year:

I would be willing to verbally fight anyone to death in defense of all of the listed films produced between 1985 and 1999. These are some of the best, most imaginative examples of cinema ever made. Most of them were cornerstones of my childhood the minute I laid eyes upon them. I don't know anyone of my age group who doesn't still quote "Pee-wee's Big Adventure" at least once per year.
After Y2K? Eh, I can't vouch.
As noted above, he obviously can't get enough of Johnny Depp and is totally married to Bonham Carter. I can't blame him on either count. First we've got Depp. If I need to explain to you why he's awesome, then you need awesome lessons. And if you're a director I think you know it's pretty much understood that the spouse is stays in the picture so you stay in the picture when the cameras go away.
But enough already.
How many times must we see this trio bang out another zany tale? How many times do I have to see black and white in an alternating pattern on film? Burton's been using the same visual cues for between 10 and 25 years depending on who you ask.
Not to mention the fact that this is a horrifying, disjointed retelling of the "Alice" tales. Parts are cherry picked from the carcass of Lewis Carroll's yarn. Whatever you think of Tim Burton, I defy you to place him higher than Carroll in the cannon of human artistic achievement. I don't know about anyone else, but I'm going with the originator of the style that Burton only hopes to high-five. Besides that, Burton's visuals are becoming more horrifying each outing.
What Burton needs is a time-out.
I don't want him to take a permanent break, I just think it's fine to slow your own roll and recenter yourself a bit.
And, you know, maybe find some new actors.
Posted by Rob at 3:54 AM No comments:

Movie Review: "This Is It" 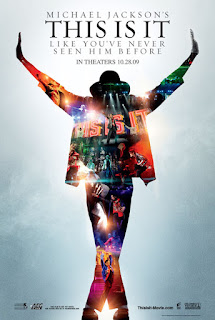 What can you say about this movie?
There's not much here. It's rehearsals for a series of 50 concerts in London. Michael Jackson died before opening night. Ominously, this series of concerts was called "This Is It."
And truly, Jackson looks as if he's knocking on heaven's door with his pale, skeletal fist. In his dancing he's doing a lot more pointing here than usual. As Ash pointed out, he probably spent most of the day pointing at things he wanted. That is, unless he was putting his hand up in a "stop" position. Sometimes pointing can me be misinterpreted.
In the opening sequence we see dancers who are creaming their jeans to be able to gyrate for the King of Pop. We never find out their names and when they are dancing for Jackson and the director with numbers pinned to them the lucky few who are picked aren't specifically announced.
As my friend Kaleb said when I asked him about it, "It's an entire movie of B-Roll."
He's not wrong.
The "performances" that are "sung" and "played" are horrendous renditions of all Jackson's classics. There are even terrible short films that were being produced with hundreds of people behind the scenes on set to make awful visuals to go along with the shitty renditions.
It took a lot of manpower to make media this insipid.
Did I mention he looks gaunt as hell here? Were I Jackson's physician I certainly would not prescribe him 50CCs of stadium concerts in a world city.
As he was being craned over the space where the audience would never get a chance to stand the director implored Jackson to "hold on" and to "be careful." It was moving incredibly slowly and looked as if it would lose to an airport people mover in a side by side race. Still, a still wind or an unkind word look as if it might blow him like a fall leaf into the orchestral pit.
Does that sound like something you might be interested in?
Posted by Rob at 1:45 AM No comments: