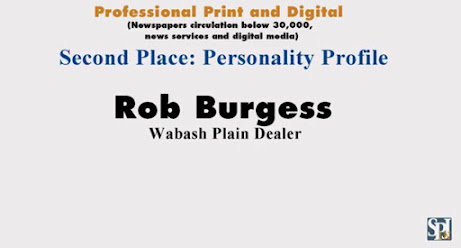 On Monday, June 14, 2021, the Indiana Professional Chapter of the Society of Professional Journalists (SPJ) announced the winners of their 2020 Best in Indiana Journalism Contest. The awards banquet was held online instead of in-person due to safety concerns around COVID-19.

A video of the awards ceremony is available here:

I won second place for Personality Profile for publications with circulation below 30,000. 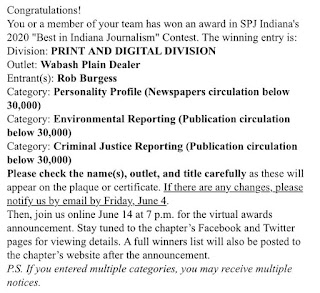 Here is a story about it:

On Monday, the Indiana Professional Chapter of the Society of Professional Journalists (SPJ) announced the winners of their 2020 Best in Indiana Journalism Contest.

Among those recognized was Wabash Plain Dealer Editor Rob Burgess, who won awards in three separate categories for publications with circulation below 30,000.

The rest of the 2020 award winners may be found here.