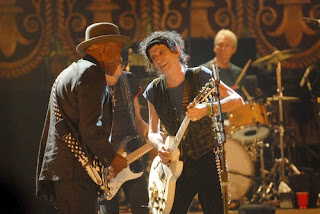 The main dramatic tension of the Martin Scorsese-directed, Rolling Stones-starring concert film “Shine a Light” seems to be the lack of an ordered set list. Scorsese wants one and the Stones won’t give him one until the very last second. This fact is one of the only things I knew about this movie before I started watching it.
Nevertheless, the Rolling Stones are more active than most people of their age group (even if they can’t get a set list together on time), especially the Glimmer Twins themselves Mick and Keith. Clearly, the Rolling Stones don’t need anyone to feel sorry for them anytime soon.
They don’t require your pity.
The archive interview and concert footage is great and very well selected by Scorsese. At one point a young Mick suggests that his then-two-year-long career could even go as long as another year. Comedy in editing is fully achieved when the screen once again fills with the image of present-day Jagger prancing on stage.
Also, we can tell that Marty had to have a hand in the song selection, which relies heavily on the hits. The biggest surprise after the credits rolled was the conspicuous absence of Scorsese favorite “Gimme Shelter”, which he seems to use every third movie. In fact, if I had to pick one song that definitely would be included before watching, it would have been that one. No matter, what’s here is still great.
Another interesting point is that the subtitles are far and few between, but they are present. Normally, if music plays during a movie and no dialogue is on the screen a music note will appear, often with a dry description like “fast rock plays.” Here they spare us and only include text when spoken.
In the absence of a dramatic arc, I played a game with myself where I tried to predict the best moment of the movie in real time:
I would say the appearance of President Bill Clinton on stage to do a meet and greet with both Scorsese and the Stones is the most surprising, delightful moment of the film. Hillary appears later on, which is really not that shocking when it is revealed that this is, in fact, a benefit for the Clinton Foundation.
…20 minutes later…
OMG, I take that back; Jack White just showed up on stage to duet with Mick for lead vocal and guitar for “Loving Cup”.

…20 minutes later…
OK, now Buddy Guy has just hopped on stage in all his polka-dotted greatness and annihilated the Muddy Waters classic “Champagne and Reefer”. I give up predicting what the most amazing moment is here, because, after all, this is being helmed by Martin Scorsese. There’s no reason for him to let anyone in on anything. 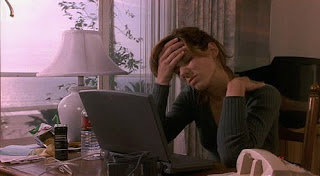 In Japan, "The Net" was known as "The Internet" (which I feel is a more literal, matter-of-fact translation of the title.) Also, did you know that there was a 22-episode run of a TV version of "The Net" in 1998? Or what about the fact that there was 2006 direct-to-video release of "The Net 2.0", a sequel? Would it surprise you that Bullock made it back for neither of these?
Either way, the original isn't a bad movie, I just can't work up the energy to care whether Sandra Bullock makes it out of the clutches of "The Net" or not. And several of the gimmicks in the movie such as ordering pizza online, reserving airline tickets and instant messaging are beyond commonplace now.
I think the most boorish thing about "The Net" is the character of "Jack Devlin", played by Jeremy Northam. A real Snidely Whiplash-type, we are the opposite of shocked when he, gasp, is suddenly revealed to be a hired hitman wooing vulnerable software engineer Angela Bennett (Bullock). And all she wanted was a vacation in Cozumel! (Her first in six years, she said!)
Say, that reminds me, Dennis Miller is the bearded friend Dr. Alan Champion. So that's something to look forward to. You can also look forward to the heavy-handed concept that Sandra Bullock (who loses her identity) has a mother who has--wait for it, wait for it--Alzheimer's.
Boom.
In some ways I think everyone should see this movie at some point in the future. I'm more likely to drop this in a time capsule than recommend this to somebody in 2011. People in 2035 need to know what passed for a techno-thriller in the mid-90's. The central conceit of "The Net" is that we're supposed to be freaked out by how easily someone's life could be erased or altered when it's computerized.
Facebook has basically accomplished the same goal as the bad guys in "The Net", Cathedral. Facebook extracted the same information. People volunteered what they would otherwise safeguard.
They didn't even have to raise their voice or ask twice.
Posted by Rob at 7:51 PM No comments:

Published:"Record Store Day: the 411 on local events" in NUVO Newsweekly 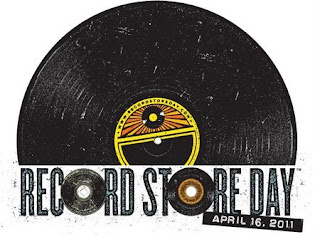 My story, "Record Store Day: the 411 on local events," has been published in the current issue of NUVO, on stands from April 13 to 19. The story covers the Indianapolis response to Record Store Day 2011 on April 16. The story is also available on the website.
Posted by Rob at 1:50 AM No comments: 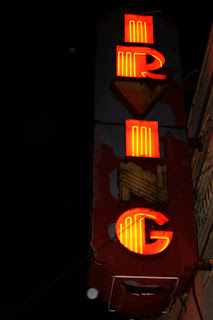 [The following post is also being cross posted to the Anderton Leaf Photography blog.]

On March 8, 2011, my story "Review: Shake Ups & friends at the Irving" was published in NUVO Newsweekly. The article covered the March 5 Noah East/Salvador Dalia Llama Farm/The Shake Ups show at the Irving Theater. It can still be found in the digital edition. Also published was a slideshow by Anderton Leaf Photography. You can see the rest of the photos on Flickr.
Posted by Rob at 11:22 PM No comments: 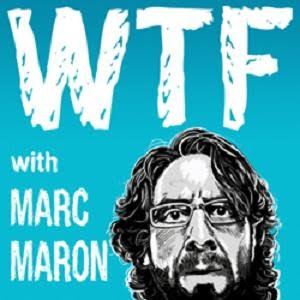 [Editor's Note: The following is the latest in a series covering my top 10 podcasts and my favorite episodes from each. Here's what we know so far:
#1 - WTF with Marc Maron
#2 - Radiolab
#3 - This American Life
#4 - Real Time With Bill Maher
#5 - Doug Loves Movies
#6 - Savage Love Podcast
#7 - Freakonomics Radio
#8 - The Moth Podcast
#9 - The Ricky Gervais Podcast
#10 - Fresh Air with Terry Gross]

I was late to the party on WTF with Marc Maron.
I had heard it mentioned time and again, but it wasn't until Ira Glass, host of This American Life, wrote these opening words to this blog post on October 26, 2010 that I finally took notice:


Right now, pretty much every comedian without a network TV show has his own podcast, but Marc Maron's WTF Podcast, here on the web or here on iTunes has distinguished itself as the New York Times of comedy podcasts, and by that I mean the definitive comedy podcast of record.

A veteran comedian, Maron, exposes himself and his struggles with mental health so nakedly that his guests follow suit. I first became aware of Maron during my childhood when he was a frequent Squigglevisioned guest on Dr. Katz, Professional Therapist:


Watch Dr Katz- Marc Maron in Entertainment  |  View More Free Videos Online at Veoh.com
It's 15 years later and Maron now takes patients himself in the form of a podcast. The difference now is that both the guest and he are laid out on their own metaphorical therapist couches. Doctor is patient. Patient is doctor.
Talking to funny people about their pain for 90 minutes at a time scratches an intellectual itch I didn't even know I had before I started tuning in. The most interesting people often have the worst childhoods, with the need to make others laugh often making up for some other deficit in their psyche.

Everything.
I'm serious.
Every single episode of this podcast is worth hearing. I made the mistake at the beginning of my listening experience by thinking that I would only enjoy the episodes featuring guests that I knew.
I was totally wrong.
Warning: the show pulls no punches, so anyone faint of heart when it comes to talk about language, sex or violence should steer clear.
Running through the episode list I'm hard-pressed to pick favorite. Since the show has been going for 163 episodes and counting, and only the last 50 are still free, that leaves 113 episodes that are hidden behind a pay wall. Some of these episodes include:
- The two-part Carlos Mencia episode, in which he exposes him for the fraud he is.
- Another two-part episode, director Judd Apatow shares own interviews with famous comedians he conducted for his high school radio show.
- Even the episode where Ira Glass himself is interviewed is revealing.
Posted by Rob at 12:24 PM 4 comments: