Movie Review: "The Invention of Lying" 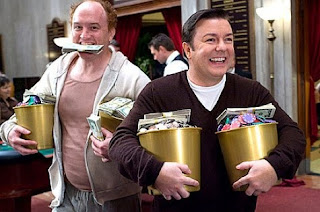 I am a fan of Ricky Gervais because he spins the straw of his most abhorrent traits into comedic gold.
Ash hates Ricky Gervais because his lengthy meditations on these qualities repulses her.
Gervais, along with Matthew Robinson, shared writing and directing credit and starred in last year's "The Invention of Lying".
The short answer is that this film is bound to satisfy neither people like Ash nor myself. It takes two opposing movie concepts and attempts to mind-meld them together. The end result is a flat finish to what started as a sparkling beverage.
The concept is a bold one that is initially adhered to closely before becoming far less pronounced by the ending: The film is set in a world where no one can lie. Mark Bellison (Gervais) is an unsuccessful screenwriter in a bizzaro version of Hollywood where blockbusters consist of fireside lectures on famous historical periods. He faces eviction after losing his job for failing to write an entertaining lecture about the 1400's. At the bank he goes to withdraw his last $300 to limp away from his home when he is asked how much he has in his account. The lie is unexpectedly birthed, told and believed and in short order. He walks out the front door with his $800 for rent and a star is born.
Sex and money are first on the list of dreams Bellison makes real for himself. The stakes are raised when he comforts his dying mother by basically inventing the idea of heaven. Word gets out about this knowledge and Belllison is quickly elevated to superhuman status.
That's as far as that pillar of the plot extends.
On the other side we have Anna McDoogles (Jennifer Garner) who is Bellison's object of affection the entire time. In the compulsory absence of any tact, McDoogles is brusque and insulting to Bellison. She only begins coming around to him because he receives messages from "The Man in the Sky."
Either one of the films contained in "...Lying" could be a potential classic. One is obviously about religion (Gervais is an athiest) and the other is about the importance of a reasonable amount of honesty in the pursuit of maintaining relationships. The ending is quick, forced and robs both concepts of the full flowering of ideas they deserved. It feels as if some pitch meeting took place that was initially rejected until the addition of a love story was grafted onto the trunk of the story.
Posted by Rob at 1:58 AM No comments: 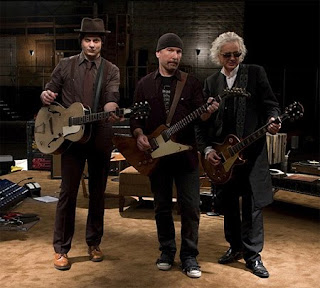 I have been a lapsed guitar player for quite a few years now. That means I used to play a lot, especially from the ages of 12 to 19. Since then I only play sporadically. As such, I have a predilection towards admiring the way people who never stopped playing work their instrument. It is thrilling to see someone who possess perfect mastery of their chosen form of expression, and even more so when it produces rock and roll as a result.
So I knew eventually I would have to get around to seeing the documentary, "It Might Get Loud", which features a constructed meet-up for three incredibly famous guitar players: Jimmy Page of Led Zeppelin, The Edge of U2 and Jack White of the White Stripes. While the combination of all three is an interesting experiment, the real takeaway here is how the interaction highlights both the strengths and the insecurities of those on stage:

The Edge
His name is "The Edge". That should explain most of what you need to know about The Edge. He plays in a band called U2 with a lead singer named Bono. The simplicity of these names implies a vast self-assurance. He talks a lot about himself and the mountains of effects pedals he has at his beck and call. While this is all amazing, when removed from these technological innovations his riffing is quite simple. This is not a criticism, but a reality.

Jack White
Jack White is a goofball. His urgency to come off as a contemporary of the two other stars permeates most everything he does. He is the anti-The Edge in that he frequently extols the virtues of raw sounds while The Edge bring his amps to the beach.
At one point I'm pretty sure there was supposed to be a song that each of them contributed a part to before passing it off to the next. White is the only one shown recording this song containing such lyrics as, "what do you got that I ain't got?" In the car ride over to the jam session he says that he wants to "trick them" so he can "learn all their secrets."
Oh, and he also had a harmonica microphone on a string attached to a small speaker custom installed in the body of one of his guitars.

Jimmy Page
Jack White would not be Jack White without Jimmy Page. Zeppelin is such a heavy influence on both White's singing and playing that it is nearly unimaginable that the White Stripes would be anywhere without them.
Jimmy Page has some of the more interesting things to say about the guitar as he basically invented an entirely new way to use the instrument. He has been what both Jack White and The Edge strive for: the embodiment of freedom and determination. Some of the more interesting scenes involved Page's recounting of his early days as a session guitarist before breaking out with the Yardbirds.

The only two complete performances come at the end, finishing off with a rendition of The Band's "The Weight". It's not spectacular, but I didn't mind the excuse to make this film. Being a lead guitar player traditionally requires a certain amount of ego that other instruments don't seem to acquire at such a rate. I'm more interested in how they came to be that way than what would happen if they all came together.
Posted by Rob at 6:54 PM No comments: